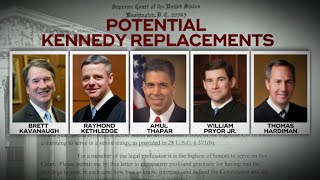 Many say the resignation of Justice Kennedy represents a "threat to democracy" because Trump will no doubt appoint someone keen to serve his authoritarian bent. But a democracy that can be threatened or even "destroyed" by the resignation of one unelected official (with a lifelong term) and the appointment of another unelected official (with a lifelong term) by an "elected" official who didn't even receive the majority of votes is a strange kind of democracy, isn't it? Does that really sound like a strong and vigorous system for ensuring that the democratic will of the citizenry is properly and securely addressed?

Why do we have a system where a defeated candidate can take the highest office in the land, then wield the power of making lifelong appointments to an unelected body which holds the ultimate sway over our public (and personal) life? What kind of democracy or republic do we have when someone who was not actually the choice of the majority of voters can reshape the nation in a fundamental way, for generations to come, by making a few appointments to an unelected panel?

Yes, it is disastrous that Trump will get another Supreme Court appointee. Although it's also true that Justice Kennedy, as the deciding swing vote on the court, has already done a great deal to "destroy democracy" with many of his votes, especially in the Citizens United case, in which he and the other conservative justices opened the door to the complete and utter domination of the electoral process by the now-unrestricted power of oligarchs, corporations and the ever-mysterious pushers of "dark money."

Indeed, in his final go-round as an unelected arbiter-for-life over the nation, Kennedy's swing vote upheld Trump's racist, unconstitutional and morally vile "Muslim ban" -- a decision that ranks alongside the Court's upholding of slavery in the Dred Scott case and its acquiescence in the racist evil of placing Japanese-Americans in concentration camps. He was also the deciding vote on the Court's decision to destroy public sector unions -- with clear implications for the later application of its "reasoning" to private sectors unions as well. He has for decades voted in virtual lock-step for the broadening of corporate power and the dominion of Big Money, all at the expense of the common good. Ronald Reagan knew well what he was doing when he gave Kennedy his lifelong sinecure.

Kennedy did provide key votes on upholding gay rights and reproductive freedom, which were worthy accomplishments deserving of praise. But again, how is that these fundamental human freedoms hang on the decision of one person -- again, an unelected official appointed by an official who might not even been the choice of the voters? And in such a system, those worthy accomplishments can be rolled back in an instant by a successor.

Justice Kennedy -- universally praised by our savvy savants as a "moderate" and "centrist" -- knows all this, of course. He knows his resignation will allow Trump to put his filthy stain on American life for decades to come. And he doesn't care. He is happy for this to happen. Since his resignation, his very close ties to Trump and the Trump family have become clear. And not just personal ties, but financial ones. Kennedy's son, Justin, was for many years one of Trump's closest financial associates. Justin Kennedy worked with Deutsche Bank, where he helped funnel more than a billion dollars' worth of loans to Trump -- years after US banks would no longer deal with the corrupt and deceitful developer. With the help of the German bank and the Supreme Court justice's son, Trump was able to keep his dodgy scam-machine going even after his many spectacular business failures.

As the New York Times reports, the Trumpsters have spent a lot of time reassuring Justice Kennedy that they would appoint someone in his mold -- if he would only retire before the Democrats possibly take control of Congress in November. The possible replacements Trump have floated so far are former Kennedy clerks; other federal judgeship picks have gone to Kennedy clerks and associates as well. So it may be that Kennedy's successor could continue his votes on the very few social issues where Kennedy deviated from the hardcore rightwing line he otherwise followed. Because Trump and his gang don't really care one way or another about abortion or gay rights -- in fact, they would be happy to keep these issues in play, so they can use them to stir up "the base" as needed. What matters is that the next judge follows Kennedy in upholding corporate power and authoritarian rule, as he has reliably done for years.

Note also that Kennedy was apparently keen to prevent the Democrats from blocking a Trump nominee. Kennedy wants Trump to make the appointment while the Republican extremists still hold Congress. He is glad to help his longtime family friend and associate perpetuate his noxious legacy far into the future. Kennedy just wanted to be sure that one of his guys gets a shot at the arbiter-for-life gig. After that -- who cares?

I don't expect we will actually see a "huge battle" over Kennedy's replacement either. If it comes before the elections -- as it certainly will -- several Democrats will fold and vote for Trump's pick, as they did with Neil Gorsuch. After all, Trump's pick will almost certainly be a protege of the departing Justice, someone who can be depicted as "very much in the Kennedy mold." The coming NYT op-eds on this practically write themselves: "While many feared Trump would move radically to the right on his choice -- Alex Jones for Justice, anyone? -- the president has surprisingly steered a middle course, picking an experienced judge who has clerked with Justice Kennedy and reflects his moderate, centrist approach. This pick may be the most 'presidential' thing that Mr. Trump has ever done."

All the nominee needs to do is to signal discreetly to Democrats that he (and it will almost certainly be a male, as the overwhelming majority of Trump's judicial picks have been) will uphold Kennedy's position on gay rights and abortion, and the Dems will fall all over themselves in a spasm of "bipartisanship." Meanwhile, the Trump gang will be signaling not so discreetly to Republicans that the nominee will vote to overturn all those icky rulings for perverts and bitches, and the Congressional extremists will overlook any "moderate" overtones in his record.

How the nominee will actually vote on these particular issues is completely unknown, of course. And, as noted, this doesn't really matter to Trump or the Congressional extremists. What will matter is that the new Justice replicate Kennedy's faithful adherence to domination by monied elites and the expansion of authoritarian power. And that's exactly what we'll get, for years and years and years to come. Even if the majority of the people don't want it. (Just as the majority of people didn't want Trump to be president.) Because that's the kind of "democracy" we have.

Related Topic(s): Democracy; Issues; Replacement; Resignation; Supreme Court Justice Anthony Kennedy; Unelected Judges, Add Tags
Add to My Group(s)
Go To Commenting
The views expressed herein are the sole responsibility of the author and do not necessarily reflect those of this website or its editors.