Even before a trove of leaked e-mails exposed her anti-Sanders agenda, Wasserman Schultz was seen by many as too divisive to remain as chair. 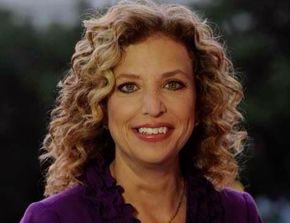 Philadelphia -- Democratic National Committee Chairperson Debbie Wasserman Schultz announced Sunday that she would step down from her position at the close of this week's Democratic National Convention, shaking to its very foundations the party she has led for five years. The Florida congresswoman's sudden decision to quit -- amid a firestorm over leaked e-mails that suggested the party apparatus was biased in its approach to the 2016 nominating race between presumptive nominee Hillary Clinton and Vermont Senator Bernie Sanders -- came after party leaders reportedly made moves late Saturday to strip Wasserman Schultz of her speaking slot at the convention and to replace her as the presiding chair for the quadrennial gathering of the party she has officially helmed since 2011.

The end came quickly for a party chair who just days ago had been looking forward to a triumphal convention.

As CNN reported Sunday morning, "The DNC Rules Committee on Saturday rescinded Wasserman Schultz's position as convention chairwoman, instead naming Rep. Marcia Fudge, D-Ohio, as permanent chair of the convention, according to a DNC source."

By Sunday afternoon, Wasserman Schultz was officially on her way out -- asserting that she wanted to focus on her Florida congressional district (where she faces a tough primary challenge from progressive Tim Canova) and on her new role as a Clinton campaign surrogate.

"Going forward, the best way for me to accomplish those goals is to step down as Party Chair at the end of this convention," said Wasserman Schultz in a statement. "As Party Chair, this week I will open and close the Convention and I will address our delegates about the stakes involved in this election not only for Democrats, but for all Americans."

DNC Vice Chair Donna Brazile, a popular figure in the party who has said the "stupidity" exposed in the DNC emails "needs to be addressed," will serve as interim chair through the election.

Related Topic(s): Democratic; E-mails; Resignation; Wasserman Schultz-Debbie; Wikileaks, Add Tags
Add to My Group(s)
Go To Commenting
The views expressed herein are the sole responsibility of the author and do not necessarily reflect those of this website or its editors.