Sarah Palin was right. Ok, I'll wait for you to stop laughing. Ready to continue? 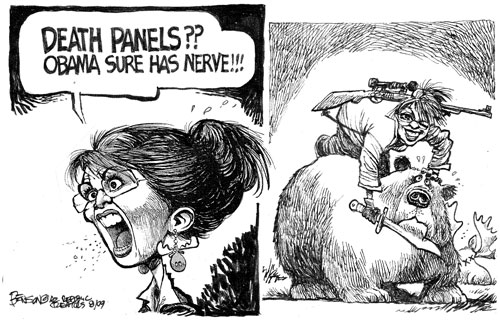 Where they exist is in the Paul Ryan 2012 Budget, the latest attempt to dumb down the conversation.  I find it amusing how the FOP (Fake Outrage Party) has adopted the Jedi Mind Trick as a doctrine. How else can you justify the way they're explaining their proposed destruction of Medicare and the deaths that will surely follow?

Simple mathematics starkly illustrate just how reprehensible and morally repulsive this budget would be. If a senior on Medicare receives a voucher for $15,000 (which is basically a gift card to the private insurance store) and their health care costs exceed this amount, they're on the hook for the difference. Does anyone in the FOP even understand basic arithmetic? Seriously, has anyone looked at health care costs for people on Medicare? In most cases it's absolutely staggering.

I'm a healthy 40 year old who obtains health insurance through my employer (I pay for it so don't get excited Teabaggers!) and the thought of fending for myself on the private insurance market sends chills up my spine. I can't possibly imagine the cost of obtaining private health insurance if I was a senior, or God forbid, a senior with major health issues.

Considering even average assisted living facilities probably cost more than double or triple what the gift card would cover, I think it's clear to see that it would turn into senior genocide.

So, as in Star Wars, Paul Ryan is trying to feed something to the American people that they don't want but he's going around telling them "Yes you do" and expecting them to believe it! Mr. Ryan, I have watched all the Star Wars movies and I KNOW Jedi's when I see them and you, sir, are NO Jedi!

John Scott is the founder and creator of the website Shred Of Truth and a Passionate Progressive who fights for middle and working class values. Tune into My Morning Drive weekday mornings at 8:30am on his YouTube channel. He was interviewed by Mike (more...)
Related Topic(s): Death Panels; Medicare; Obama; Palin, Add Tags
Add to My Group(s)
Go To Commenting
The views expressed herein are the sole responsibility of the author and do not necessarily reflect those of this website or its editors.