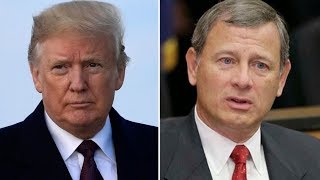 It was great to see you take a stand for the independence of the court you lead and, in a broader sense, the American judiciary as a whole. You clearly care. It is a small but crucially important thing.

Further, your remarks seemed to rebut and blunt the series of attacks against judges, courts, and the judiciary that President Donald Trump has engaged in since you swore him in and he began speaking in an official capacity.

Your remarks in this regard are sure to bolster the morale of dedicated public servants, including but not limited to federal judges throughout the entire judicial branch. In addition, they should have a profound and positive effect in a material way on the public's confidence in the independence and impartiality of the courts. You have taken meaningful and badly needed first steps. There is, however, a great deal more that needs to be done.

Donald Trump has an uncanny knack for understanding what people are feeling and repackaging those sentiments in oratory for his own personal gain. No, he is not the only one who has concerns about the appearance of politicization within the courts. His transgression is that he seeks to convert such sentiment to personal advantage.

The catalyst for many Americans' deep concern that the Supreme Court had become fatally politicized was of course the 2000 Bush v. Gore decision. While that decision on its face did not decide the election in favor of Republican candidate George W. Bush, its subtext, intent, and effect clearly did. The impact on public confidence was magnified by the perception that U.S. Supreme Court had overridden the Supreme Court of the State of Florida's will that every vote be counted. In addition, the court distanced itself from the decision in its opinion, declaring that it should not serve as precedent for future cases. As you are aware, the decision was 5-4, breaking down along what appeared to be clearly partisan political lines. The substantial undermining of public confidence in the court's impartiality was as inevitable as the perception that the court had become an ardent political actor.

Eighteen years later, the court is still sharply divided politically. There is of course some consensus, and there are examples of decisions in which the justices act independently; however, on the most significant cases in recent memory, partisan polarization still largely rules the day.

How can the court not be politicized when in truth it is the product of a purely political process? Senate Majority Leader Mitch McConnell's denial of a vote for your counterpart on the DC Circuit Court, Chief Judge Merrick Garland -- which opened the door to the ascension of Judge, now Justice, Neil Gorsuch -- artificially and deliberately gerrymandered the political composition of the court you now lead. Arguably subverting the intent, if not the letter, of the Constitution by removing from the president his right to choose a Supreme Court justice. A right the framers clearly intended him to have.

In considering the political tides that affect the Supreme Court, it should be noted that the current president ran in part on a "guarantee" that he would appoint Supreme Court justices that would overturn Roe v. Wade. He maintains that he kept that promise by appointing both Neil Gorsuch and Brett Kavanaugh. So political objectives are clearly a component of the court's construct.

The course on which you have embarked is a hopeful and encouraging one. However, to have a lasting effect you must, through your guidance of the court, endeavor to make real the promise of impartiality and objectivity sufficient to lead a healing of the judicial branch through the example of the Supreme Court. That will require sacrifices both personal and, yes, political. Sacrifices you might not otherwise be inclined to make. Such are the demands of leadership.

The public may never see much of that work, as it will occur in the court's internal deliberations. But actions on the public record and in the public's view will play perhaps a greater role in restoring the confidence of the American people in the judicial branch of our government.

Take heart. I just saw President Trump on television say that he "liked and respected you." What could go wrong?

Related Topic(s): Judges; Politicization; Supreme Court Chief Justice John Roberts, Add Tags
Add to My Group(s)
Go To Commenting
The views expressed herein are the sole responsibility of the author and do not necessarily reflect those of this website or its editors.