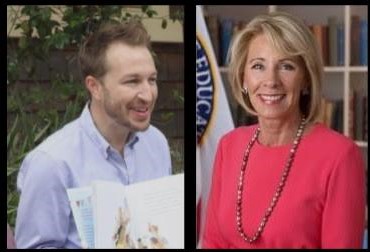 Nick Melvoin / Betsy DeVos
(Image by Nick Melvoin for School Board 2022/US Dept. of Education)   Details   DMCA
ts across the great City of Los Angeles should be afforded the opportunity to attend a CWC [Citizens of the World] LA school" - Nick Melvoin

As a member of the Los Angeles Unified School District (LAUSD) School Board, Nick Melvoin is paid $125,000 a year to represent students in district-run public schools. This did not stop him from writing a letter on behalf of a privately run charter school to Betsy DeVos seeking a grant that would help it expand. This proposed expansion would reduce the number of students attending the schools Melvoin is supposed to represent, depriving public school students of funding and diminishing the educational services that they receive.

To add insult to injury, the charter school chain that Melvoin was representing was Citizens of the World, which operates five franchises within the district. The West Valley site has a parasitic relationship with Shirley Avenue Elementary School where it operates in rooms formerly used by the public school to provide special education services and enrichment activities such as robotics. As of July 13, 2021, the chain has a past due balance of $974,629.67 in over-allocation fees as a result of receiving more space from the district than they were entitled to based on actual enrollment. This occurred over a period of several years.

(Image by Carl J. Petersen)   Details   DMCA
Melvoin wrote to DeVos that Citizens of the World deserved to receive the grant because its "goal is to create community-based public schools that reflect the abundant racial, cultural, and socioeconomic diversity of their surrounding neighborhoods." While this is a worthwhile aspiration, the data does not support Melvoin's claim that this charter chain has "a steadfast commitment to Diversity and Inclusion."

When the Hollywood franchise was last renewed in 2019, just four months before Melvoin wrote his letter, the LAUSD Charter School Division (CSD) noted that "throughout its history, Citizens of the World Charter School Hollywood has struggled to reflect the community in which it operates." During the renewal of the Silverlake franchise in 2016, the CSD found that the number of students qualifying for Free and Reduced Lunch was "significantly lower than the Resident Schools Median...at Grant Elementary, where the school is co-located." On the co-location on the Shirley Avenue campus, where 85% of the student body is socioeconomically disadvantaged, only 21% of the Citizens of the World students fell into this category.

Citizens of the World is also lauded by Melvoin because of a claim that it "develops leaders who can solve critical challenges in new ways - across lines of difference." This is not borne out by the actions of the administration who are supposed to be leading its students by example. When it was co-located at Stoner Elementary, relations were so bad with the public school parents that it erupted into "physical, conflict". At the Shirley campus, Citizens of the World has demanded that the LAUSD prevent protests against its operations and has used a restraining order in an attempt to silence its critics. At its new East Valley campus, Citizens of the World did not even reach out to the community as is required by the LAUSD when moving into a new community.

In fairness to Melvoin, it appears that he did not actually write the text of the letter, but instead affixed his signature to words that were provided to him, perhaps by the charter school itself. Letters signed by both LAUSD Board Member Monica Garcia and California State Senator Ben Allen are essentially identical and include the same phrases describing the school's goals, philosophy, and "achievements."

Elected in the shadow of Trump's 2016 victory, Melvoin has attempted to distance himself from the former president's policies. However, when given the opportunity to help a charter school, Melvoin appealed directly to the same administration that was bringing harm to LAUSD students. This serves to highlight the fact that there is little difference between the educational philosophies of Melvoin, Trump, and DeVos. All three support policies that seek to diminish unions, privatize education, and downplay the severity of the COVID crisis. Voters took the opportunity to evict Trump and DeVos last November. Next November they will be given the opportunity to finish the job and vote Melvoin out of office.