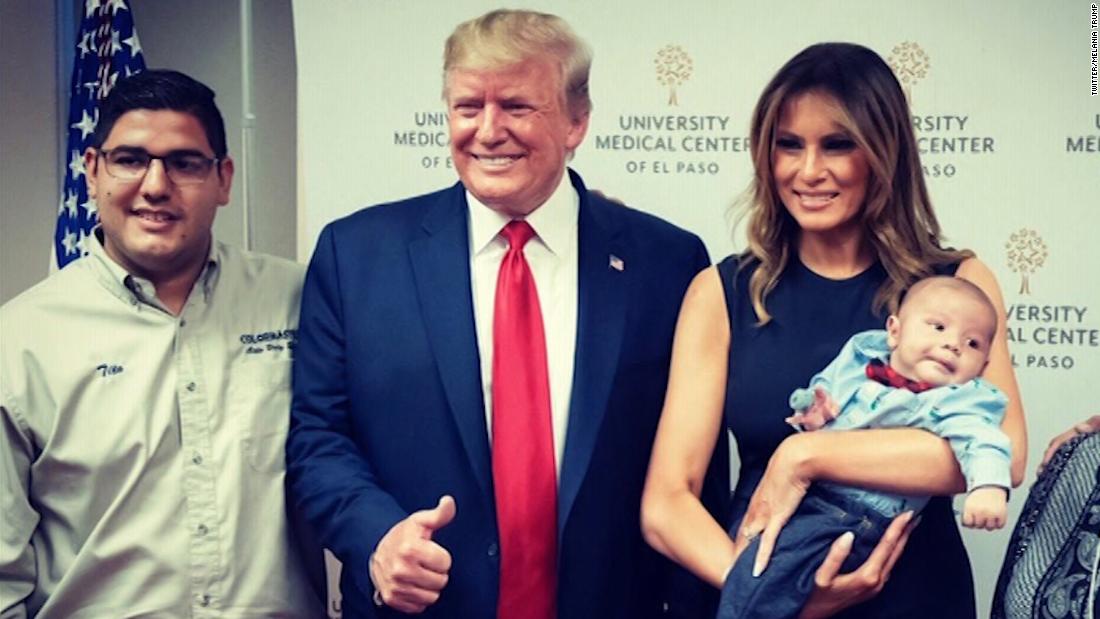 This is proof Trump is a psychopath. He is grinning and giving a "thumbs up" sign while Melania holds a baby orphaned by the killer Trump inspired in El Paso.

The two month old's parents, Jordan and Andre Anchondo died protecting him during the El Paso shooting. An uncle brought the infant back to the hospital so the Trumps could use the tiny orphan as a human prop.

"Hello everyone big thumbs up! Lookie at this widdle brown cutie pie parents were murdered by one of my own! Such a great day to be Trump. Let's go make some campaign propaganda films while we are here, where all those people bled to death from multiple gunshot wounds."

Sick, Sick, Sick. Forget impeachment. He needs to be institutionalized. And Melania. Be Best, honey. I know you really don't care, do you? 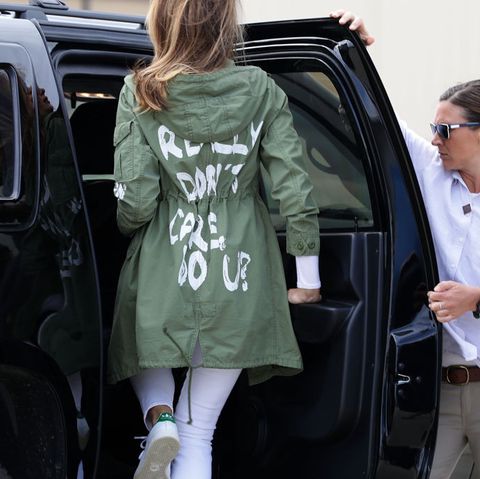 While Trump was paying unwanted visits to Dayton and El Paso hospitals, ICE agents tore 600+ families apart with a raid on a Koch chicken processing plant in Mississippi. Funny, they never raid the Trump properties where illegals have worked for years.

Children came home from school to locked, empty houses. They had to find neighbors to help them understand that mommy and daddy were taken away. The images and stories are haunting. Today the Psychopath in Chief defended the raid as a "very good deterrent" to "illegal" immigration. So is chopping off their feet, like runaway slaves -- that's a deterrent, too.

It's hard to imagine that Trump would want these disturbing images on the telescreens so quickly after the mass shooting he inspired, but then again -- he is a psychopath. The "optics are bad" for a big raid, given that the El Paso shooter said he was "trying to kill Mexicans" and his manifesto is peppered with Trumpspeak about the Mexican "invasion."

But here's the thing -- Trump was seriously pissed that he had to make that mealy-mouth dead-eyed speech Monday denouncing White Supremacists. It stuck in his throat like a chicken bone. He can't stand it when he's forced to say something he doesn't believe -- like sympathy for the victims. Or anything approaching an apology or admission of a mistake. Can't do it. The ONLY way he could get through it was to do something to undermine the words he was forced read from the Teleprompter. So he decided to f*ck up some more non-white kids' lives.

At the hospital visits his toxic narcissism was on full display. A cellphone video released shows a conversation with hospital workers, bragging about his rally crowd size. Might as well have been penis size. "I was here three months ago, we made a speech " that place was packed, the judges are respected now," Trump said. "That was some crowd, we had twice the number outside." He then attacked Beto O'Rourke, who put his presidential campaign on hold to return to his home of El Paso to offer actual comfort to the shooting victims' families. "And then you had this crazy Beto. Beto had 400 people in a parking lot." 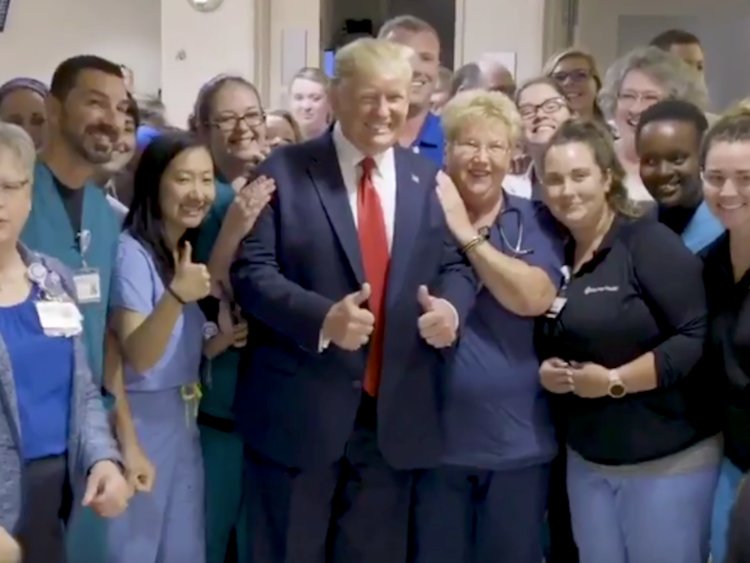 Kathy never expected a career in radio as a talk show producer. Born and raised in Atlanta, Georgia, Kathy was completing her nursing degree when in 2001 - in an emergency - she was asked to fill in as the producer of Mike's program. Within a few (more...)
Related Topic(s): Death; Families; Neonazi; Patients; Psychopath; Shootings; Trump, Add Tags
Add to My Group(s)
Go To Commenting
The views expressed herein are the sole responsibility of the author and do not necessarily reflect those of this website or its editors.