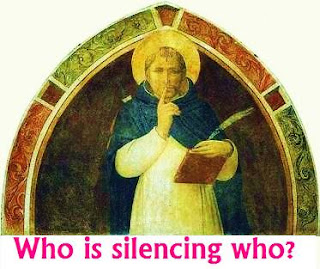 It's somehow ironic that this year's Day of Silence falls on TAX Day. One day is looked upon as a necessary evil, while it is sad to think that the other is necessary at all. And to America's school children, it has become a day which separates the bullies and their comrades, from the victims and their friends.

It's also a day that America's moralists oppose by insisting that their children are the real victims - of indoctrination:

Keep your child from being sexually indoctrinated

On this day, students participating in the "Day of Silence" will wear pro-homosexuality T-shirts, buttons, and stickers, refuse to answer teachers' questions in classrooms, make it difficult for other students to concentrate, and generally take over school campuses for the entire day.

Thousands of government high schools and increasing numbers of junior high and middle schools are allowing this propaganda throughout an entire day -- even during instructional time. The purpose of the silent civil disobedience is to promote homosexuality, bisexuality and transsexuality to other students throughout the entire day.

In the past, some moralists have encouraged children remaining in schools to carry a card that says this:

"True tolerance means that people with differing -- even opposing -- viewpoints can freely exchange ideas and respectfully listen to each other. It's time for an honest conversation about homosexuality. There's freedom to change if you want to. Let's talk."

Interesting. The above statement seems to indicate that a free exchange merely means telling gay teens that they can change. Knowing how virulent some of the rhetoric of moralists can be, it's doubtful that gay teens and their friends would ever be able to get a word in edgewise.

Be that as it may, more and more groups like the Illinois Family Institute and Save California are giving up on the "exchange ideas" concept and encouraging families to keep their children home from school. Other organizations opposing the Day of Silence: American Family Association, Concerned Women for America, Mission America, Traditional Values Coalition, Americans for Truth and Liberty Counsel. Because of the dissemination of false information about homosexuality, some of these groups have been considered hate groups by the Southern Poverty Law Center.

"We want education, not indoctrination."

So sayeth the Grand High Exalted Mystic Ruler of Hom*phobia, Pastor Ken Hutcherson.* And as you can see from the above, "indoctrination" is now the main issue, with moralists thinking that THEY are being bullied into "acceptance of the homosexual lifestyle". Matt Staver of Liberty Counsel says " Students and staff who disagree with a radical sexualized agenda are demonized and made to feel like outsiders."

Yes, quite an ironic statement, considering that when it comes to demonizing, America's leaders of the Christian Right do it constantly and consistently.

And yet they constantly deny any responsibility in gay teen suicides. Tony Perkins recently said that there has never been a study linking suicides to religion and society (The Christian Right). Such a disingenuous statement may elicit laughter from most people, but, as I've stated before, it only goes to show that righteous arrogance precludes reality: more than 30,000 Americans commit suicide each year and 5,000 of them are teenagers. A majority of suicides are caused by depression as a result of "not fitting in" or feeling inadequate. Such feelings have been compounded by religion and religious groups for hundreds of years. Events like Halloween "Hell Houses" make the "sinner/outcast" point so stridently that teen suicides spike at that time of year.

Another irony in telling parents to keep their kids home: Day of Silence is voluntary to students, not matter what moralists say about schools mandating silence. But pulling a son or daughter out of school, is NOT voluntary to the students. A form of bullying is displayed by the parents: righteous bullying. Any form of "demonizing" on the part of participants in the Day Of Silence spreads to the families of the absent students. Keeping kids away from school certainly widens the gap between intolerance and acceptance.

Bullies. Victims. Intolerance. Acceptance. This day may, more than ever, delineate the kids and families involved.

Rev. Dan Vojir is has been writing/blogging on religion and politics for the better part of ten years. A former radio talk show host (Strictly Books " Talk America Radio Network) and book publisher, Dan has connected with some of the most (more...)
Related Topic(s): American Family Association; Bullying; Day Of Silence; Education; Education Higher; Family Research Council; Gay Bashing; Gay Equality; Intolerance; LGBT; (more...) Religious Hypocrisy; Religious Right; Teen Suicides; Tolerance, Add Tags  (less...)
Add to My Group(s)
Go To Commenting
The views expressed herein are the sole responsibility of the author and do not necessarily reflect those of this website or its editors.