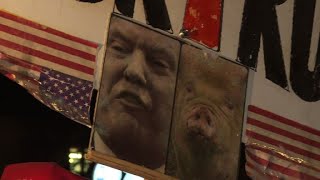 The so-called globalized elites meet at the World Economic Forum in Davos this year under the specter of extreme turbulence.

The WEF Global Risks Report is hardly reassuring. The top five most likely risks for 2018 all range from extreme weather/climate change disturbances to cyber-attacks. Yet, according to the report, in terms of impact, they are superseded by weapons of mass destruction -- a direct consequence of the Korean peninsula standoff.

Global elites are somewhat paralyzed by political inaction facing the most pressing questions of our time, just as the global economy is inundated by liquidity. Quantitative easing was actually the only concrete response to political inaction, adhered to by every Central Bank, from the ECB to the Japanese. Stock exchanges all over tend towards irrational exuberance; in 2017 the Dow went up 25 percent, the Nikkei 19 percent, the Hang Seng 35 percent.

As inequality reigns supreme, Davos 2018 preaches the necessity of striving towards a common future in a fractured world; a poor euphemism for the stark fact of a wealthy happy few getting much wealthier while untold masses of poor veer toward dirt poor.

Standing at the feet of Thomas Mann's Magic Mountain, Davos has always positioned itself as the gilded agora of promoters of structural reform -- as in market liberalization, low taxes and opposition to the public sector; policies that actually sharpened the abyss between haves and have-nots.

The latest Oxfam report stands out as an exceedingly grim counterpart to the WEF's Global Risks. It states that the richest 42 individuals on the planet control as much wealth as the poorest 50% of the world's population; "Eighty-two percent of the new wealth created has gone to the top 1 percent, while 0 percent has gone to the world's poorest 50 percent."

Trickle down? Actually, trickle up.

And a major cause of such inequality, according to Oxfam, is tax havens -- which in the current casino atmosphere stand no risk of being regulated.

Bill Gates, Warren Buffet and Jeff Bezos, among themselves, hold as much wealth as half of the U.S. population (160 million people). Gates, Buffet and Bezos, as well as significant swathes of the global ruling class, seem to be quite worried; after all stark inequality is bound to breed a tsunami of electoral revolts that might quickly degenerate into dystopian nightmares.

Still, in a quirky Davos way, the star attractions at the Magic Mountain this week may well be U.S. President Donald Trump and French President Emmanuel Macron. They may stand as polar opposites on climate change, but both happened to have enacted tax measures to further lighten up the already light burden carried by Oxfam's 1 percent.

Davos is centered on heavy Anglo-American attendance. But "revisionist powers" (Pentagon terminology) China and Russia are also very much in the game. The verdict is open on how strategic is the Russia-China partnership, but the fact remains that being complementary in manufacturing and energy/high technology facilitates their geo-economic/geopolitical unity.

Related Topic(s): Davos; Economic; Inequality; World Economic Forum; Yuan, Add Tags
Add to My Group(s)
Go To Commenting
The views expressed herein are the sole responsibility of the author and do not necessarily reflect those of this website or its editors.