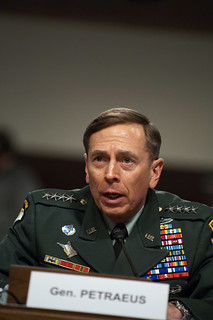 The latest brilliant plan to curtail Isis in the Middle East? Give more weapons to current members of al-Qaida. The Daily Beast reported that former CIA director David Petraeus, still somehow entrenched in the DC Beltway power circles despite leaking highly classified secrets, is now advocating arming members of the al-Nusra Front in Syria, an offshoot of al-Qaida and a designated terrorist organization. Could there be a more dangerous and crazy idea?

Petraeus was forced to respond on Tuesday, the day after his article provoked a firestorm, telling CNN's Jake Tapper that he doesn't want to arm al-Nusra itself, just "some individual fighters, and perhaps some elements, within Nusra." He thinks the US could somehow "peel off" these fighters and convince them to join the much weaker rebel army that al-Nusra recently decimated. Oh okay, then. He's in favor of arming only the "moderate" members of al-Qaida: that sounds so much better.

Let's put aside for a second that there's not much difference between arming al-Nusra and arming "some individual fighters, and perhaps some elements, within Nusra." How the US can possibly "peel off" fighters from a terrorist group is a complete mystery. In Iraq -- Petraeus is apparently using part of the largely failed Iraq "surge" as his blueprint here -- he convinced some Sunni tribes to switch sides temporarily, but that was with over 100,000 US troops on the ground to do the convincing. Does Petraeus think we should invade Syria to accomplish the same feat?

The idea that we should add more weapons to the equation, let alone give them to militants who the US considers terrorists, is preposterous at this point. Depressingly, escalating our involvement is the dominant talking point in Washington's foreign policy circles these days.

History could not matter less to war planners, as the dangerous cycle of arming dangerous factions in the Middle East and escalating US involvement is about to start anew. The CIA armed the Mujahideen in the 1980s in their guerilla fight against the Soviets, many members of the Mujahideen would end up forming the core of al-Qaida in the 1990s.

Related Topic(s): Al-nusra; Al-qaida; David Petraeus; Isis; Syria; Terrorists-Terrorism, Add Tags
Add to My Group(s)
Go To Commenting
The views expressed herein are the sole responsibility of the author and do not necessarily reflect those of this website or its editors.