The late Koch brother bought influence using PACs and other proxies. A prank call to Scott Walker revealed the truth about how the Kochs had their way with Republican politicians. 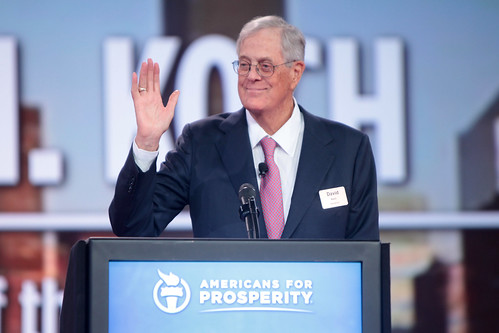 David Koch was not a political mastermind. He was a failed candidate, a bit of a bumbler as a strategist, and a frequently inconsistent ideologue. But he knew what rich men who dabble in politics know: If you throw enough money around, two things will happen. First, the machinery of electioneering and governing will adjust to the cash flow. Second, the recipients of your largesse will take your calls.

These were not just truths for David Koch and his brother Charles. They are the truths of electioneering in our times. Yet the Kochs have been more than mere "major donors." They have been the poster boys for a crisis that grew dramatically worse on their watch, as they steered their vast fortune into bending the governing of states across the country and decisions made in Washington to their will.

David Koch shuffled off this mortal coil Friday, at age 79, after devoting an extraordinary portion of his life and fortune to pushing American politics to extremes that ultimately even he could not control. Wealthy campaign contributors come and go. But this passing is being noted, appropriately, as major news in a country that has been the target of multi-generational manipulation by the Koch family.

Koch inherited his wealth and his ideological inclinations from his father, Fred Koch. Dad was an oilman and an industrialist who dabbled in politics, as a founding member of the John Birch Society in the late 1950s. The group was formed during the presidency of Dwight Eisenhower, who warned: "Should any political party attempt to abolish social security, unemployment insurance, and eliminate labor laws and farm programs, you would not hear of that party again in our political history. There is a tiny splinter group, of course, that believes you can do these things. Among them...are a few other Texas oil millionaires, and an occasional politician or business man from other areas. Their number is negligible and they are stupid."

Related Topic(s): David Koch; Donations; Elections; Koch Brothers; Koch-funded Pacs; Politics; Republican, Add Tags
Add to My Group(s)
Go To Commenting
The views expressed herein are the sole responsibility of the author and do not necessarily reflect those of this website or its editors.