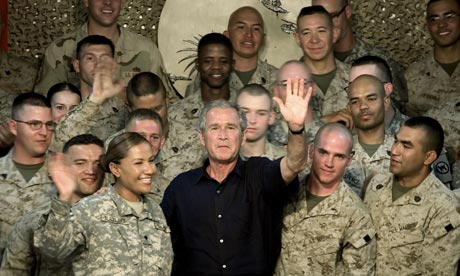 Former Bush speechwriter David Frum, author of the infamous "Axis of Evil" claim in Bush's 2002 State of the Union address, has a column this morning announcing that "all of us who advocated for the [Iraq] war have had to do some reckoning." His column is an attempt to provide such a reckoning, and contains numerous revealing assertions.

He begins with this melodramatic decree, designed to make you sympathetic of the stressful and scary environment in which Bush officials were operating: "My youngest daughter was born in December 2001: a war baby." To justify this characterization, he says that "when my wife nursed little Beatrice in the middle of the night, she'd hear F-16s patrolling the Washington skies," and that "a few weeks before, a sniper had terrorized the Washington suburbs. Anthrax attacks had killed five people and infected 17 others. What would come next?" (In actuality, the anthrax attacks came from a US Army lab; the Washington sniper attacks were in 2002, not 2001, and were perpetrated by two Americans; and hearing some F-16s patrolling the sky is hardly the stuff of extreme war trauma, particularly when compared to what people in actual war zones regularly experience). Frum is right that the fear levels were extremely high in this time period, but that was due to a deliberate campaign orchestrated by the administration in which he served.

Frum's most interesting revelation comes from his discussion of Ahmed Chalabi, the Iraqi exile whom many neocons intended to install as leader of that country after the US took over. Frum says that "the first time [he] met Ahmed Chalabi was a year or two before the war, in Christopher Hitchens's apartment." He then details the specific goals Chalabi and Dick Cheney discussed when planning the war:

"I was less impressed by Chalabi than were some others in the Bush administration. However, since one of those 'others' was Vice President Cheney, it didn't matter what I thought. In 2002, Chalabi joined the annual summer retreat of the American Enterprise Institute near Vail, Colorado.  He and Cheney spent long hours together, contemplating the possibilities of a Western-oriented Iraq: an additional source of oil, an alternative to US dependency on an unstable-looking Saudi Arabia."

Wars rarely have one clear and singular purpose, and the Iraq War in particular was driven by different agendas prioritized by different factions. To say it was fought exclusively due to oil is an oversimplification. But the fact that oil is a major factor in every Western military action in the Middle East is so self-evident that it's astonishing that it's even considered debatable, let alone some fringe and edgy idea.

Yet few claims were more stigmatized in the run-up to the Iraq War, and after, than the view that oil was a substantial factor. In 2006, George Bush instructed us that there was a "responsible" way to criticize the US war effort in Iraq, and an "irresponsible" way to do so, and he helpfully defined the boundaries:

"Yet we must remember there is a difference between responsible and irresponsible debate -- and it's even more important to conduct this debate responsibly when American troops are risking their lives overseas.

Prior to the invasion of Iraq, nothing produced faster or more vicious attacks on war opponents than the claim that oil was playing a substantial role in the desire to invade. On February 23, 2003, then-Congressman Dennis Kucinich appeared on Meet the Press and argued that oil was a primary reason for the US to want to invade Iraq, and in response, Richard Perle (Frum's co-author in their 2004 "An End to Evil") replied: 'It is a lie, Congressman. It is an out and out lie.' That exchange led the Washington Post's liberal columnist Richard Cohen to write this:

"'Liar' is a word rarely used in Washington ... So it was particularly shocking, not to mention refreshing, to hear Richard Perle on Sunday call Rep. Dennis Kucinich (D-Ohio) a liar to his face.' ...

"Kucinich himself seemed only momentarily fazed by Perle's sharp right to his integrity and went on, indomitable demagogue that he seems to be, to maintain that the coming war with Iraq will be fought to control that nation's oil. ... How did this fool get on 'Meet the Press'?"

There are countless other examples of people having their reputations viciously maligned for suggesting that oil was a significant factor in the US and its allies wanting to invade Iraq.

In order to minimize the role he played in helping bring about this war, Frum writes:

"People often ask me whether I have regrets. It seems absurdly presumptuous to answer the question. I could have set myself on fire in protest on the White House lawn and the war would have proceeded without me."

Related Topic(s): Chalabi; David Frum; Iraq Occupation Strategy; Iraq Oil Deal; Oil And Resource Wars, Add Tags
Add to My Group(s)
Go To Commenting
The views expressed herein are the sole responsibility of the author and do not necessarily reflect those of this website or its editors.