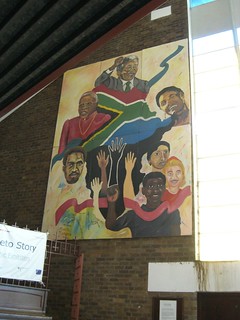 Owner: arboresce at flickr.com/people/39995951@N00/ License: Creative Commons Attribution-ShareAlike 2.0
(Image by arboresce)   Details   DMCA
fought for the country's freedom, too, as a media-maker and troublemaker. . . . what an adventure it has been."

"If words could slay apartheid, it would have been buried years ago."

When South Africa Called, We Answered: How the Media and International Solidarity Helped Topped Apartheid (Cosimo Books, 2014), is about Danny Schechter's role in transforming Africa ("a small part, of a great human story and world-class force"); the role of so many others; Mandela's indispensable place in all of this; and about the power of media when resorted to effectively---as a source of truth and call to action, reaching out to all corners of the world and in this specific case, succeeding.

To separate the dancer from the dance (pace W B. Yeats and here, far more than Apartheid)--Danny Schechter from South Africa's amazing history between the sixties and today--is not the point, though South Africa is inseparable from Schechter's identity and music is a key medium in Schechter's contribution to the epochal struggle.

"For years in Boston radio, I saw how music could spread the news, how rock 'n' roll was often a more powerful educator than the printed or spoken word." Schechter decided correctly that superstars could attract mainstream news coverage and hence public attention to epochal events transpiring in South Africa.

"[W]e raised more than a million dollars for anti-apartheid projects." "Sun City" [a recorded anthology that came out in 1985] had as much or more impact in getting people to understand apartheid as the plethora of news stories and TV reports about it. Pop stars [including Bruce Springsteen] did what politicians wouldn't and journalists couldn't: they spoke out bravely and clearly. They took a stand."

Sun City "also inspired [GlobalVision's] 'South Africa Now' TV series. So my journalistic interests provoked an independent musical project that in turn inspired me to create a news show. " Through "South Africa Now," Schechter first met Nelson Mandela, an association that lasted until the end of the Nobel laureate's life, through Schechter's direction of seven documentary films about him and his work.

In South Africa's struggle away from Apartheid, Schechter's many contributions spread words among those who weren't receiving them otherwise. The author incorporates himself into the narrative to the extent he was involved, nurturing readers with the wealth of the insider's insights, "dissections," many-faceted and all-embracing, multi-dimensional. He views South Africa as a scholar (though he denies this), journalist, filmmaker, television producer, videographer, photographer, and much more.

Schechter's latest book never stops thinking; each sentence embraces a bird's-eye view of the five Ws. I tried to underline important statements but ended up with way too much--nearly the whole thing. For that reason, you will find a plethora of direct quotations below. If this is not his opus magnum, it could be.

To understand the miraculous transformation that embraced South Africa near the time of other cataclysms in Berlin and the former Soviet Union is to read these pages, revisit Schechter's life during the tempestuous years in which he was first a principal in the civil rights movement in the United States (he helped organize the 1964 March on Washington) shortly before he absorbed South Africa's plight and turned his skills there, never leaving either place--in addition to many others.

He is ubiquitous. He is already at work on his next book, which will be released by Seven Stories Press.

Schechter's personal history involves an in-depth understanding of his home, his adopted home (South Africa), and through them the world. There is little that escapes his eagle eyes:

"I wrote countless reports, essays, blogs and commentaries. I had morphed as an American into a self-identified South African, often knowing more about what was going on in a country 10,000 miles away than I knew about my own, sometimes even knowing more than many South Africans."

Related Topic(s): Activist; Africans; Apartheid; Change; History; Liberation; Media; Music; Revolution; Rights, Add Tags
Add to My Group(s)
Go To Commenting
The views expressed herein are the sole responsibility of the author and do not necessarily reflect those of this website or its editors.

STAY IN THE KNOW
If you've enjoyed this, sign up for our daily or weekly newsletter to get lots of great progressive content.
Series: "Danny Schechter News Dissector"