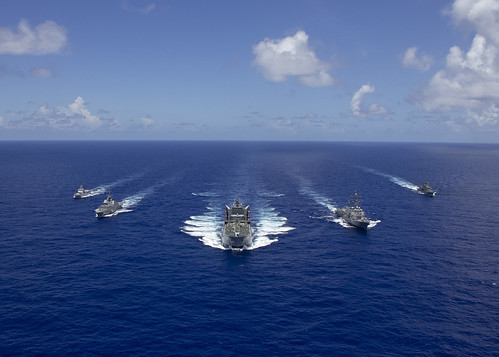 Over the past two years, the United States has dramatically increased the number of U.S. Navy aircraft carriers and destroyers sent into the South China Sea as a freedom of navigation show of force missions to remind the Chinese government that the U.S. considers the Western Pacific and the South China Sea as a part of the oceans of America and its allies. Additionally, in 2020, the Trump administration ratcheted up tensions with China over Taiwan by sending to Taiwan the highest-ranking U.S. officials in over 40 years. The Chinese government has responded with the largest naval exercises in its history and sending flights of 18 aircraft to the edge of Taiwan's air defense zone.

U.S. Pressure on China through Actions in Taiwan

China considers Taiwan as a renegade province that will be eventually subsumed by China. In 1979, while President Jimmy Carter severed formal diplomatic ties with Taiwan and formally recognized the People's Republic of China, the U.S. Congress passed the Taiwan Relations Act, which is the basis for Washington's relationship with Taipei. It includes the provision of selling military weapons for Taiwan's self-defense. The law does not require the United States to defend Taiwan if China attacks, but it also doesn't rule it out a policy known as strategic ambiguity.

To the anger of the Chinese government, the Trump administration has increased contact with Taiwan in a variety of ways. After the 2016 election, President Trump spoke by phone with Taiwanese President Tsai Ing-wen in what is believed to be the first time a U.S. president or president-elect has spoken directly with a Taiwanese leader since at least 1979.

Additionally, over the past two months, the United States has ramped up its confrontation with China by high level official visits to Taiwan. For the first time in over 40 years, a cabinet level U.S. official visited Taiwan when Health and Human Services Secretary Azar went to Taiwan in August 2020, a visit that some consider a Trump administration's jab at China for not being forthcoming with information on the Corona virus. Most recently, on September 17, Undersecretary of State for Economic Affairs Keith Krach visited Taiwan for a three-day visit, the most senior State Department official to go to Taiwan in four decades.

Ahead of Krach's arrival in Taiwan, on September 16, Kelly Craft, the U.S. ambassador to the United Nations, had lunch with Taiwan's top official in New York, a meeting she called historic and a further step in the Trump administration's campaign to strengthen relations with Taiwan. In mid-August, the de facto US ambassador to Taiwan Brent Christensen became the first American official to participate in commemorations of Chinese attacks on the Taiwanese island of Quemoy.

Taiwan is one of the top importers of U.S. weapons. The United States has sold military equipment to Taiwan since 1979. President Barack Obama signed off on two major weapons deals totaling about $12 billion. President George W. Bush approved nine arms packages, worth approximately $5 billion, during his first term. President Trump has announced two major military sales to Taiwan. The first, approved in June 2017, was worth $1.4 billion and included advanced missiles and torpedoes. It also provided technical support for an early-warning radar system. In October 2018, a second arms package, worth an estimated $330 million, was approved. Also, in 2018, the United States unveiled $250 million worth of upgrades to its de facto embassy in Taipei despite Chinese objections.

On October 13, 2020, Reuters reported that the United States plans to sell as many as seven major weapons systems, including mines, cruise missiles and drones, to Taiwan as the Trump administration increases pressure on China.

The U.S. Congress is also involved in the administration's support for Taiwan that is designed to increase tensions with China. On October 1, 2020, 50 U.S. senators of both parties sent U.S. Trade Negotiator Robert Lighthizer a letter urging him to begin the formal process of negotiating a trade pact with Taiwan. Such a move would likely anger Beijing, which sees certain partnerships with Taiwan as an affront to China's sovereignty.

The U.S. Military In the Pacific

Besides pressure on China through its actions with Taiwan, in the past six months, the confrontation and competition between the U.S. and Chinese navies has increased dramatically. In response to increased U.S. military operations in the Western Pacific, China has increased its pressure on issues in the South China Sea, the East China Sea, Hong Kong and Taiwan.

In the Pacific region, the U.S. has a very large presence: 121 military bases in Japan; 83 bases in South Korea; 4 bases in Guam; 5 bases in Oahu, Hawaii including Headquarters of Indo-Pacific Command; one of largest training area in the U.S. on Big Island, Hawaii; a missile test range on Kauai, Hawaii; a Missile test range on Kwajelein, Marshall Islands; 1 base in Northern Marianas, Saipan & Tinian; 1 base in Australia; and defense agreements with the Marshall Islands, the Federated States of Micronesia & Palau through the Compact of Free Association which covers a huge area of the Pacific larger than the land mass of the continental United States.

The U.S. Indo-Pacific command is responsible for U.S. military operations on over 52 percent of the earth's surface, in 36 nations with more than half the world's population and 3,200 different languages and for 5 of 7 U.S. collective defense treaties. The Indo-Pacific command has 375,000 U.S. military and civilian personnel. The U.S. Indo-Pacific Fleet has 200 ships, including five aircraft carrier strike groups, 1,100 aircraft, and 130,000 sailors and civilians. The U.S, Marine Corps Forces in the Pacific has two Marine Expeditionary Forces, 86,000 personnel and 640 aircraft. The U.S. Pacific Air Force has 46,000 airmen and civilians and 420 aircraft. The U.S. Army Pacific has 106,000 personnel in one corps and two divisions, 300 aircraft and five watercraft. There are 1,200 Special Operations personnel assigned to the Indo-Pacific Command.

Ann Wright is a 29-year US Army/Army Reserves veteran, a retired United States Army colonel and retired U.S. State Department official, known for her outspoken opposition to the Iraq War. She received the State Department Award for Heroism in 1997, after helping to evacuate several thousand (more...)
Related Topic(s): Aircraft; China; China Politics; China-US Agreement; Confrontation; Corona Virus Coronavirus Covid-19; Military Active-Duty; Navy; Sailors; South China Sea; (more...) South Korea, Add Tags  (less...)
Add to My Group(s)
Go To Commenting
The views expressed herein are the sole responsibility of the author and do not necessarily reflect those of this website or its editors.