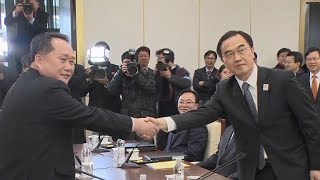 There was near-unanimous welcoming of the surprise peace talks this week between North and South Korean delegations. Even the bellicose US President Donald Trump put aside his fiery rhetoric to endorse the diplomatic engagement between the two divided Koreas, saying he "hoped something good would result."

The two Korean sides met for 11 hours of discussions in the "peace village" of Panmunjom near the Demilitarized Zone that has separated the states since the Korean War (1950-53). The cordial handshakes and friendly words exchanged raised hopes that a major breakthrough was underway -- this after a year of mounting tensions and fears of an all-out war breaking out on the Korean Peninsula.

Russia and China lauded the opening of talks this week -- the first in nearly two years of impasse -- saying it was exactly what they had been prescribing for the past several months in order to calm escalating tensions. The United Nations secretary general Antonio Guterres also praised the new commitment to dial down conflict.

Perhaps surprising was the apparent welcome given by Washington to the talks. President Trump said he was "100 percent" behind South Korean President Moon Jae-in's initiative to invite the North to dialogue.

Previously, Washington has been adamant that there would be no talks with Communist North Korea until its leader Kim Jong-un first gave a commitment to end the country's nuclear weapons program. Evidently, Washington seems prepared for its South Korean ally to proceed with negotiations without conditions. At least for now.

Trump reportedly acceded to the South Korean leader's request for joint American military exercises to be postponed until after the Winter Olympic games and the follow-up Paralympics which end in March. That move was seen as a major concession to North Korea, which has long protested that such drills are a provocative rehearsal for war.

With the postponement of the US-South Korea military maneuvers, Pyongyang quickly responded to agree to attend the talks this week at the DMZ with a delegation from Seoul.

Again, this is the kind of trust-building that Russia and China have been advocating. Both Moscow and Beijing have maintained that the "freezing" of US-led military exercises can lead to the North Korean side halting its nuclear missile tests, which in turn helps to consolidate negotiations for a final peace settlement to the decades-old Korean conflict. Last year, Washington rebuffed Moscow and Beijing's "freeze-freeze" proposal. But the new year opening of talks vindicates the proposal.

The progress achieved from talks this week alone is impressive. Not only has North Korea agreed to send athletes to participate in the Winter Olympics hosted by South Korea next month, thereby removing security fears over the event; the two sides went further to re-establish military-to-military dialogue in a bid to reduce tensions. They are also planning to resume reunification exchanges between families separated by the Korean War.

This is the very kind of diplomatic progress that can be achieved if mutual goodwill is permitted. It negates Washington's belligerent stance of treating North Korea as a "rogue state." The Trump administration, as with previous US administrations, has repeatedly spurned diplomacy with North Korea, preferring instead to use threats of war and "total destruction."

Trump gave himself credit for his tough rhetoric and policy of "maximum pressure" bringing North Korea to the negotiating table this week.

However, another way of looking at it is that North Korea feels ready to talk with adversaries because it has achieved as of late last year the nuclear capability to strike the US. Kim Jong-un declared the capability to hit the American mainland in this New Year address. It was in the same speech that he extended an olive branch to South Korea to open peace talks between "people of the same national heritage."

Notably, this week the North Korean delegation warned that its nuclear weapons were pointed only at the United States, "not at our brethren in South Korea, nor at China nor Russia."

US media tended to read the talks initiative with cynical motives. In a New York Times report, headlined 'North Korea moves towards detente with Seoul', the following editorial comment dripped with cynicism: "Few in Seoul or Washington believe Mr Kim, though an avid sports fan, is motivated solely by the Olympic spirit. The Winter Games also present him with an ideal opportunity to throw a wrench in President Trump's threats of military action if the North does not agree to give up its nuclear program."

Related Topic(s): Negotiation; North Korea And South Korea Talks; Washington Interference, Add Tags
Add to My Group(s)
Go To Commenting
The views expressed herein are the sole responsibility of the author and do not necessarily reflect those of this website or its editors.