The poor pilgrims dragged themselves wearily
along to Mecca through gray Syria,
huddled and doubled up
the pilgrims stumbled along -
away from delusion and ferment
to repent, repent, repent...
And I was standing like an impenitent sinner
on the summit of the mountain
where once upon a time (don't stir!)
Abel was killed by Cain.
And - of all communique's of blood
the most unforgettable -
the elemental voice was heard:
'Cain, where is your brother, Abel?'
But once again the Pharisees,
with their vile-sweet voices:
'Why do you worry about visions that are fake?
Yes, with Abel maybe we should have held back.
Admittedly, there was a little mistake,
but generally speaking we were on the right track...'
And I was standing on the summit
between those ahead and the hosts behind,
above a world where people could commit
every corruption of their own kind.
There was no lightning and no thunder,
but the stones were crying with mouths opened wide:
'The corruption of the soul may be bloodless
but it is also fratricide!'
And I imagined a gloomy, dead
brick orphanage,
where as with henbane
the children of Abel are spoonfed
with lies by the children of Cain.
And in the faces of Abel's children,
doing what they know that they must do,
which is always to stay silent,
the red mark of Cain shows through...

And I, no one's murderer,
was standing on the sticky summit,
but my conscience murmured
like the Bible: 'You won't be able to quit!
You're corrupting your spirit with lies,
and your spirit is crumbling, cracking inside.
And to kill yourself- you cannot disguise
that that is also fratricide!
And how many women, you twister,
lie like crucifixions along your way-
but women, they are your sisters,
worth more than brothers can repay.
And the Hussars' toasts 'To the ladies,'
what are they worth?
Bravado, empty form.
To kill love-you cannot evade it,
that is also fratricide.
And someone's gray brown eyes
staring at you with disdain,
on your forehead cicatrize
you with the eternal mark of Cain...'
I shuddered:
'Quiet, O conscience...
You know this is not comparable,
it is like comparing a children's circus
with a bloody Roman shambles.' 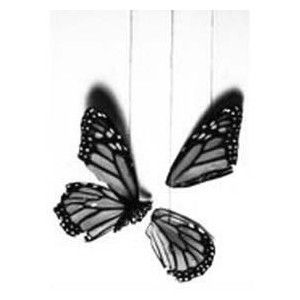 But the shadow of bony Cain
jutted out from the rocks near at hand,
and the blood of the brother he had slain
was endlessly dripping from my hand.

'Look-my bloody hands shake.
As a child it was fun to improvise,
out of curiosity to break
the velvet wings of butterflies
and then- fratricide.'

My conscience- the protectress
of the mark of Cain,
the prophetess-seer said again
with prophetically bitter sadness:
'What will you say to the eternal skies
and the court of stars when you cannot run back-
To say I am sinless would be telling lies,
but generally speaking I'm on the right track!
You know, all those whom you hate
set this up as the true state,
while the cigarettes take on
the smell of burning flesh, the Winstons, and the Kents,
and the bullet that passed through John
kills Robert Kennedy.
And the bombs charge the earth, turn
brown villages bloodred, fire black.
Admittedly they fall on children,
but generally speaking they're on the right track...
Everything begins with the butterflies,
later it comes round to bombs...
No amount of washing purifies-
the blood on your hands will be your doom.
The only murder that is fit-
is to kill the Cain inside!'

And losing my footing on the sticky summit,
face to face with the infinite,
I tore the flesh open in my side
and the strangled embryo Cain died.
I strangled everything mean and evil,
all that you would later despise,
but it was far too late to heal
the broken wings of the butterflies.
And the wind, blood-soaked, invisible,
lashed at me from the fury of space
as if the pages of the Bible
were lashing me on the face...

Related Topic(s): Poetry; Poetry; Poetry Workshop, Add Tags
Add to My Group(s)
Go To Commenting
The views expressed herein are the sole responsibility of the author and do not necessarily reflect those of this website or its editors.