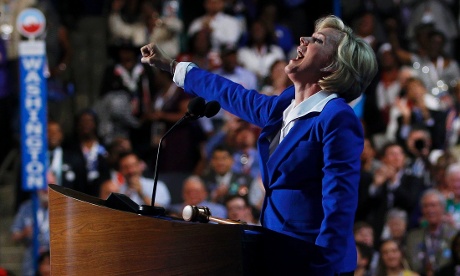 (Image by Unknown Owner)   Details   DMCA
Former Michigan Gov. Jennifer Granholm speaks at the 2012 Democratic convention. About the DOJ white paper, she admitted this week: "if this was Bush, I think that we would all be more up in arms" because "we trust the president". Photograph: Jessica Rinaldi/Reuters

This past week has been a strangely clarifying political moment. It was caused by two related events: the leak of the Justice Department's "white paper" justifying Obama's claimed power to execute Americans without charges, followed by John Brennan's alarming confirmation hearing (as Charles Pierce wrote: "the man whom the administration has put up to head the CIA would not say whether or not the president of the United States has the power to order the extrajudicial killing of a United States citizen within the borders of the United States"). I describe last week's process as "strange" because, for some reason, those events caused large numbers of people for the first time to recognize, accept and begin to confront truths that have long been readily apparent.

Illustrating this odd phenomenon was a much-discussed New York Times article on Sunday by Peter Baker which explained that these events "underscored the degree to which Mr. Obama has embraced some of Mr. Bush's approach to counterterrorism, right down to a secret legal memo authorizing presidential action unfettered by outside forces." It began this way:

"If President Obama tuned in to the past week's bracing debate on Capitol Hill about terrorism, executive power, secrecy and due process, he might have recognized the arguments his critics were making: He once made some of them himself.

"Four years into his tenure, the one-time critic of President George W. Bush finds himself cast as a present-day Mr. Bush, justifying the muscular application of force in the defense of the nation while detractors complain that he has sacrificed the country's core values in the name of security."

Baker also noticed this: "Some liberals acknowledged in recent days that they were willing to accept policies they once would have deplored as long as they were in Mr. Obama's hands, not Mr. Bush's." As but one example, the article quoted Jennifer Granholm, the former Michigan governor and fervent Obama supporter, as admitting without any apparent shame that "if this was Bush, I think that we would all be more up in arms" because, she said "we trust the president."

Thus did we have -- while some media liberals objected -- scores of progressives and conservatives uniting to overtly embrace the once-controversial Bush/Cheney premises of the War on Terror (it's a global war! the whole world is a battlefield! the president has authority to do whatever he wants to The Terrorists without interference from courts!) in order to defend the war's most radical power yet (the president's power to assassinate even his own citizens in secret, without charges, and without checks).

Although you wouldn't know it from the shock and outrage expressed over the last few days, that Barack Obama claims the power to order US citizens assassinated without charges has been known for three full years. It was first reported more or less in passing in January, 2010 by the Washington Post's Dana Priest, and then confirmed and elaborated on by both the New York Times and the Washington Post in April, 2010. Obama first tried to kill US citizen Anwar Awlaki in December 2009 (apparently before these justifying legal memoranda were concocted) using cruise missiles and cluster bombs; they missed Awlaki but killed 52 people, more than half of whom were women and children. Obama finally succeeded in killing Awlaki and another American, Samir Khan, in October 2011, and then killed his 16-year-old son Abdulrahman in a drone strike two weeks later.

That Obama is systematically embracing the same premises that shaped the once-controversial Bush/Cheney terrorism approach has been known for even longer. All the way back in February, 2009 -- one month after Obama's inauguration -- the New York Times' Charlie Savage reported that "the Obama administration is quietly signaling continued support for other major elements of its predecessor's approach to fighting Al Qaeda," and that this continuity is "prompting growing worry among civil liberties groups and a sense of vindication among supporters of Bush-era policies" (I actually wrote at the time that Savage's alarmist conclusions were premature and overly pessimistic, but subsequently told him how right, even prescient, he turned out to be).

In April, 2009, the Obama-friendly TPM site announced that "Obama mimics Bush" when it comes to assertions of extremist secrecy powers. In June, 2010, Obama's embrace -- and expansion -- of many of Bush's most radical policies had become so glaring that ACLU Executive Director Anthony Romero gave a speech to a progressive conference and began by proclaiming himself to be "disgusted with this president," while Bush's most hawkish officials began praising Obama for his "continuity" with Bush/Cheney policy.

That many Democratic partisans and fervent Obama admirers are vapid, unprincipled hacks willing to justify anything and everything when embraced by Obama -- including exactly that which they pretended to oppose under George W Bush -- has also been clear for many years. Back in February, 2008, Paul Krugman warned that Obama supporters are "dangerously close to becoming a cult of personality." In May, 2009, a once-fervent Obama supporter, New York Times columnist Bob Herbert, wrote a column warning that Obama was embracing many of the worst Bush/Cheney abuses and felt compelled -- in the very first sentence -- to explain what should be self-evident: "Policies that were wrong under George W. Bush are no less wrong because Barack Obama is in the White House."

The same month, former Bush DOJ official Jack Goldsmith -- who provided the legal authorization for the illegal Bush NSA warrantless eavesdropping program -- went to the New Republic to celebrate that Obama was not only continuing the core Bush/Cheney approach to terrorism, but even better (from his perspective), was strengthening those policies far beyond what Bush could achieve by transforming Democrats from opponents of those policies into supporters.

And exactly as Goldsmith happily predicted, polls now show that Democrats and even self-identified progressives support policies that they once pretended to loathe now that it is Obama rather than Bush embracing them. On MSNBC, Obama aides and pundit-supporters now do their best Sarah Palin impression by mocking as weaklings and losers those who think the President should be constrained in his militarism and demonizing as anti-American anyone who questions the military (in between debating whether Obama should be elevated onto Mount Rushmore or given his own monument). A whole slew of policies that would have triggered the shrillest of progressive condemnations under Bush -- waging war after Congress votes against authorizing it, the unprecedented persecution and even torturing of whistleblowers, literally re-writing FOIA to conceal evidence of torture, codifying indefinite detention on US soil -- are justified or, at best, ignored.

So none of this -- Obama's assassination program, his general embrace of Bush/Cheney radicalism, the grotesque eagerness of many Democrats to justify whatever he does -- is at all new. But for some reasons, the events of last week made all of this so glaring that it could no longer be denied, and it's worth thinking about why that is.

What made last week's revelations so powerful?

What this DOJ "white paper" did was to force people to confront Obama's assassination program without emotionally manipulative appeal to some cartoon Bad Guy Terrorist (Awlaki). That document never once mentioned Awlaki. Instead -- using the same creepily clinical, sanitized, legalistic language used by the Bush DOJ to justify torture, renditions and warrantless eavesdropping -- it set forth the theoretical framework for empowering not just Obama, but any and all presidents, to assassinate not just Anwar Awlaki, but any citizens declared in secret by the president to be worthy of execution. Democratic Rep. Barbara Lee wrote that the DOJ memo "should shake the American people to the core," while Harvard Law Professor Noah Feldman explained "the revolutionary and shocking transformation of the meaning of due process" ushered in by this memo and said it constituted a repudiation of the Magna Carta.

In doing so, this document helpfully underscored the critical point that is otherwise difficult to convey: when you endorse the application of a radical state power because the specific target happens to be someone you dislike and think deserves it, you're necessarily institutionalizing that power in general. That's why political leaders, when they want to seize extremist powers or abridge core liberties, always choose in the first instance to target the most marginalized figures: because they know many people will acquiesce not because they support that power in theory but because they hate the person targeted. But if you cheer when that power is first invoked based on that mentality -- I'm glad Obama assassinated Awlaki without charges because he was a Bad Man! -- then you lose the ability to object when the power is used in the future in ways you dislike (or by leaders you distrust), because you've let it become institutionalized.

Related Topic(s): Bush; Democracy; Democrat Hypocrisy; Democratic Lies; Democratic Sellout; Democrats Conservative; Obama; Policy; Power; Republican, Add Tags
Add to My Group(s)
Go To Commenting
The views expressed herein are the sole responsibility of the author and do not necessarily reflect those of this website or its editors.