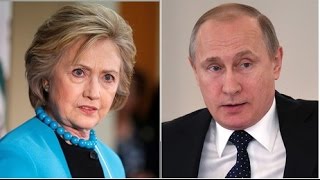 The following was written by Patrick Lawrence...

In late July 2016, author Patrick Lawrence*** was sickened, as he watched what he immediately recognized as a well planned and highly significant "Magnificent Diversion." The Clinton-friendly media was excoriating Russia for "hacking" DNC emails and was glossing over what the emails showed; namely, that the Clinton Dems had stolen the nomination from Bernie Sanders.

Six weeks before, on June 12, 2016, Julian Assange had announced that he had "emails relating to Hillary Clinton pending publication." But he did not publish them until July 22 three days before the Democratic National Convention. It was clear even then that the Democrats, with invaluable help from intelligence leaks and other prepping to the media, had made good use of those six weeks before the convention. The media was primed to castigate the Russians for "hacking," while diverting attention from the grand larceny showing through the emails themselves. It was a liminal event of historic significance, as we now know. The "Magnificent Diversion worked like a charm and then it grew like Topsy.

Patrick Lawrence was onto it from the start. He commented that he had "fire in the belly" on the morning of July 25 and wrote what follows pretty much "in one long, furious exhale" within 12 hours of when the media started really pushing the "the Russians-did-it" narrative.

Here's the text of his article:

Now wait a minute, all you upper-case "D" Democrats. A flood light suddenly shines on your party apparatus, revealing its grossly corrupt machinations to fix the primary process and sink the Sanders campaign, and within a day you are on about the evil Russians having hacked into your computers to sabotage our elections on behalf of Donald Trump, no less?

Is this a joke? Are you kidding? Is nothing beneath your dignity? Is this how lowly you rate the intelligence of American voters? My answers to these, in order: yes, but the kind one cannot laugh at; no, we're not kidding; no, we will do anything, and yes, we have no regard whatsoever for Americans so long as we can connive them out of their votes every four years.

Clowns. Subversives. Do you know who you remind me of? I will tell you: Nixon, in his famously red-baiting campaign a disgusting episode against the right-thinking Helen Gahagan Douglas during his first run for the Senate, in 1950. Your political tricks are as transparent and anti-democratic as his, it is perfectly fair to say.

I confess to a heated reaction to events since last Friday among the Democrats, specifically in the Democratic National Committee. I should briefly explain these for the benefit of readers who have better things to do than watch the ever more insulting farce foisted upon us as legitimate political procedure.

The Sanders people have long charged that the DNC has had its fingers on the scale, as one of them put it the other day, in favor of Hillary Clinton's nomination. The prints were everywhere many those of Debbie Wasserman Schultz, who has repeatedly been accused of anti-Sanders bias. Schultz, do not forget, co-chaired Clinton's 2008 campaign against Barack Obama. That would be enough to disqualify her as the DNC's chair in any society that takes ethics seriously, but it is not enough in our great country. Chairwoman she has been for the past five years.

Last Friday WikiLeaks published nearly 20,000 DNC email messages providing abundant proof that Sanders and his staff were right all along. The worst of these, involving senior DNC officers, proposed Nixon-esque smears having to do with everything from ineptitude within the Sanders campaign to Sanders as a Jew in name only and an atheist by conviction.

Ray McGovern works with Tell the Word, the publishing arm of the ecumenical Church of the Saviour in inner-city Washington. He was an Army infantry/intelligence officer and then a CIA analyst for 27 years, and is now on the Steering Group of Veteran Intelligence Professionals for Sanity (VIPS). His (more...)
Related Topic(s): Columnist; Corporate Journalism; Democrats; Mueller Investigation; Nationalist Politics; Patrick Lawrence; Salon; The War On Wikileaks, Add Tags
Add to My Group(s)
Go To Commenting
The views expressed herein are the sole responsibility of the author and do not necessarily reflect those of this website or its editors.