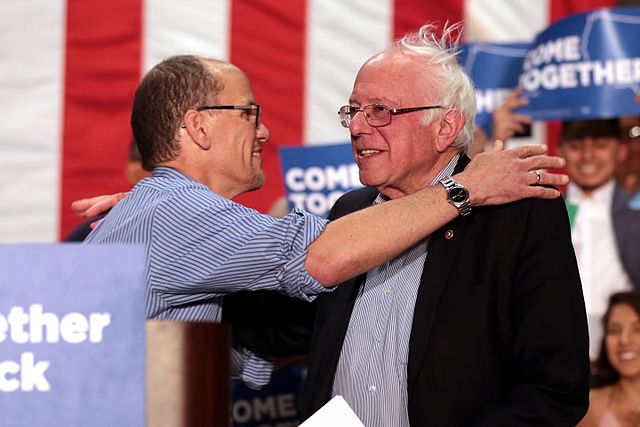 Nine months after losing the presidency, the Democratic Party is in dire need of a course correction. Grass-roots enthusiasm for the party is far from robust. Despite incessant funding appeals and widespread revulsion for the Trump administration, the Democratic National Committee's fundraising is notably weak.

And the latest DNC chair, Tom Perez, sounds no more inspiring than his recent predecessors. When Perez speaks next to Vermont Sen. Bernie Sanders, it's a stark contrast between establishment cliches and progressive populism.

While a united front against the Trump regime would be ideal, mere unity behind timeworn Democratic leadership would hardly be auspicious. Breaking the Republican stranglehold at election time will require mobilizing the Democratic Party's base on behalf of authentic populism. But the power structure of the DNC has other priorities.

A comment from Sanders five months ago remains fully relevant: "Certainly, there are some people in the Democratic Party who want to maintain the status quo. They would rather go down with the Titanic so long as they have first-class seats."

Meanwhile, along with most Democrats in Congress, the DNC remains eager to heap blame on Russia for the defeat of Hillary Clinton. That's been a nifty way to deflect attention from what cried out for scrutiny after November's election -- the reality that Clinton's close ties with Wall Street and big banks made it unconvincing to pitch her as an ally of working people.

All this is context for a lawsuit against the Democratic National Committee that has been slowly wending its way through a federal district court in Florida. The suit contends that the DNC engaged in fraud by reneging on a key commitment in its charter.

The DNC charter is fairly explicit. Article V, Section 4 says: "In the conduct and management of the affairs and procedures of the Democratic National Committee, particularly as they apply to the preparation and conduct of the Presidential nomination process, the Chairperson shall exercise impartiality and evenhandedness as between the Presidential candidates and campaigns."

The charter goes on to state: "The Chairperson shall be responsible for ensuring that the national officers and staff of the Democratic National Committee maintain impartiality and evenhandedness during the Democratic Party Presidential nominating process."

DNC emails that reached the public a year ago show direct and purposeful violations of those DNC rules. As The New York Times reported with understatement days before the national convention, "The emails appear to bolster Mr. Sanders's claims that the committee, and in particular [DNC Chair Debbie] Wasserman Schultz, did not treat him fairly."

A week after the release of those incriminating DNC emails in July 2016, a Miami-based law firm (Beck & Lee) filed a suit on behalf of plaintiffs who had donated to the DNC, alleging that the DNC committed "civil fraud."

The DNC emails show that top committee officials violated the DNC charter's "impartiality and evenhandedness" requirements. When compelled to respond at a hearing in U.S. District Court in southern Florida on April 25, the DNC's legal team came up with a revealing defense -- claiming that the DNC has a right to be unfair during the presidential nominating process.

A lawyer for the DNC, Bruce Spiva, told the judge: "We could have voluntarily decided that, 'Look, we're gonna go into backrooms like they used to and smoke cigars and pick the candidate that way.' That's not the way it was done. But they could have. And that would have also been their right."

In other words, Spiva was saying that his clients atop the DNC didn't mug democracy in this case but could have if they'd wanted to -- and they retain the right to do so in the future.

Later that day, Spiva tried to clean up a potential public relations snafu while reaffirming the DNC's legalistic stance: "In response to my hypothetical that the party could choose its nominees in a smoke-filled room, I want to just reiterate that the party ran the process fair and impartially, and does not do that and doesn't plan to do that. But these, again, are political choices that either party is free to make and are not enforceable in a court of law."

Related Topic(s): Bias; Cronyism; Democratic National Committee; Democratic Values; Fraud, Add Tags
Add to My Group(s)
Go To Commenting
The views expressed herein are the sole responsibility of the author and do not necessarily reflect those of this website or its editors.