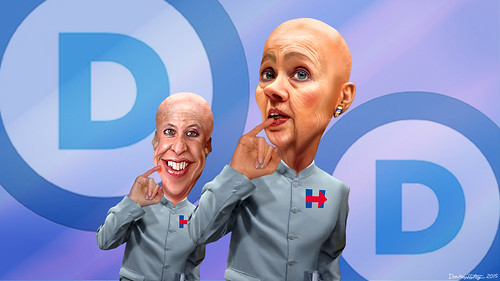 CNN reports with the headline,

They go on to inform us,

"Hillary Clinton's campaign is taking the reins of the Democratic National Committee, installing a new top official on Thursday to oversee the party's day-to-day operations through the general election.

Brandon Davis, national political director for the Service Employees International Union, will become the general election chief of staff for the Democratic Party. His selection formalizes the coordination of the Clinton campaign and the committee, a stark contrast to Donald Trump who is currently at odds with his party."

Hillary supporters think this is wonderful and natural. I see it differently. It is grotesquely premature. The election is not over. The primary is not finished. What the DNC and Clinton, together, have done is to take the collusion that has been going on for over a year, probably far longer, but at least that long, as this article informs us, Guccifer Leaked Emails Show DNC Colluded, and takes it out of the closet.

Out of the closet. The DNC has been aiding and colluding with the Clinton campaign, coordinating with the mainstream media. Any Bernie Sanders supporter has seen and opined the reality. It was not subtle. But this move is the worst kind of offensive audacity.

Of course, this is all a part of the massive fraudulent tapestry the mainstream media wove, that I described in my article, MSM Sycophants Coronate The Pretender with a Massive PR Campaign.

"This is in fact what happens," Howard Dean, former Democratic Party chairman, told CNN. "Debbie will still have the title, but somebody else will be the effective operator of the DNC. It's Hillary's pick."

No it's not. This is an outrageous manifestation of the attitude and unethical, rule-breaking relationship between the DNC and the Clinton campaign that has been in existence all along. The primary election is not over, not until the convention, regardless of how strong a PR campaign the Clintons and their mainstream media surrogates have put on.

Related Topic(s): Democrats DNC; Hillary Clinton; Media Collusion; Wasserman Schultz-Debbie, Add Tags
Add to My Group(s)
Go To Commenting
The views expressed herein are the sole responsibility of the author and do not necessarily reflect those of this website or its editors.