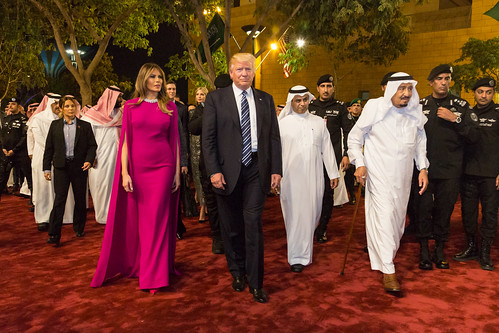 By Robert Weiner and Adjanni Ramos

With President Joe Biden pushing for secret intel on Saudi Arabia's involvement during 9/11 to be made public, it's time to review why the United States continues to deal with and support the Kingdom of Saudi Arabia. We already know that 15 of the 19 hijackers on 9/11 were Saudi, yet the Saudi government declined to cooperate during the FBI investigation following the attack. President George W. Bush allowed the bin Laden family to leave the U.S. while U.S. citizens were grounded. It's been a mystery why every recent president, from Bush through Trump, whose first foreign trip in office was to Saudi Arabia, has been soft-spoken and nice to the king.

That deference has continued under the Biden administration. On Sept. 9 at the National Press Club, when asked whether Saudi Arabia accepts responsibility for the 15 hijackers and whether he still had concerns about the nation, Homeland Security Secretary Alejandro Mayorkas responded that there was "still a case pending at [the Department of Justice]" so "I cannot provide comments, but if a state is accountable, there will be accountability."

This reluctance to be specific about Saudi Arabia must change. And there is no reason for it not to.

Yes, we want Saudi oil, but we no longer need it. The U.S., with shale and fracking, now produces most of its own oil cheaply at home. Every president literally bowing to their leaders is sickening.

On Monday, Aug. 9, 2021, the Department of Justice began reviewing documents regarding portions of an FBI investigation into Saudi Arabia's connection to the hijackers that carried out the 9/11 terrorist attack. This comes days after more than 1,700 family members of the attack's victims wrote to President Biden and said he would not be welcomed to any memorial service of the 20th anniversary of the attack unless the documents were released.

Our Justice Department has previously played along with the idea that Saudi Arabia had no connection to the 9/11 attacks, saying they found "no evidence that the Saudi government as an institution, or senior Saudi officials individually, funded [al-Qaeda]." They suggest it was low-level government agents who assisted the Saudi al-Qaeda members individuals, possibly extremist, with little to no real connection to the Saudi royals.

And yet, in April 2008, the Undersecretary of the Treasury for Terrorism and Financial Intelligence, Stuart Levey, told the Senate Finance Committee, "Saudi Arabia today remains the location from which more money is going to terror groups and the Taliban Sunni terror groups and the Taliban than from any other place in the world." They would have you believe the royals are impotent. But the CIA says Crown Prince Mohammed bin Salman oversaw the killing of journalist Jamal Khashoggi in 2018. So why do U.S. leaders continue to do business with Saudi Arabia? Any country whose leaders believe they need to murder a journalist and chop his body into little pieces should not be in business with the United States.

Less than a year after Khashoggi's death, the Trump administration vetoed a congressional resolution to limit U.S. involvement in the Saudi-led war in Yemen. It also chose not to include Saudi Arabia on a list of countries that recruit child soldiers. In October 2018, just 16 days after Khashoggi's murder, the administration approved sharing nuclear technology with Saudi Arabia, which had previously relied on the U.S. for its "nuclear umbrella," a guarantee by a nuclear-powered state to defend an allied state that does not possess such weapons.

The U.S. has been the largest producer of oil and gas since 2018. We do import from other countries like Saudi Arabia. However, the U.S. doesn't primarily consume Saudi oil. It consumes Canadian oil. The United States imports more oil from Canada than Saudi Arabia, Russia, Venezuela, Mexico and Egypt combined. So there is no major need for Saudi oil. The same can be said for the sale of U.S. arms.

The Saudis are a historically significant military weapons buyer and ally of the U.S., thanks to several military conflicts in the Middle East over the past 50 years. But Osama bin Laden was also a Saudi citizen. They only began to begrudgingly support the U.S. counterterrorist front in 2003, when al-Qaeda began attacking Saudi Arabia directly. They've become a key U.S. ally in the Middle East against Iran. But they openly supported radical leaders and movements in the Middle East.

And arms sales to the Saudis are not as large as splashy headlines would have you believe. Previous administrations prided themselves on making proposed arms deals with the Saudi government. Obama proposed selling them $115 billion in arms after they began their war in Yemen.Trump signed letters of intent with the Saudi crown for the kingdom to purchase roughly $350 billion in U.S. arms over a 10-year period. But both these deals later fell through after Congress voted to end military assistance in the war in Yemen.

As a nation, Saudi Arabia is rich and powerful. The Kingdom of Saudi Arabia is a partner of the United States, not an ally. The two nations primarily share the same enemies.