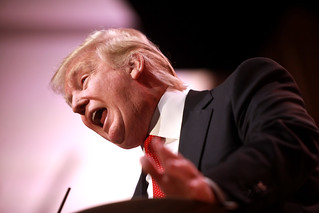 
Part I -- The Bully Acts Out As the Republican primary plays itself out, cruelty has become a campaign come-on to voters who say they are frustrated and angry with traditional politics. Frustrated and angry feelings short-circuit critical thinking and create a yearning for the quick emotional release that comes with vengeful speech and acts. Donald Trump has become a master manipulator of this situation. Trump has the type of personality that lends itself to using such an approach. He is a bully acting out. You can see this when he denigrates his opponents as losers. On the other hand, he is self-aggrandizing, always describing himself as a winner. And, apparently, he has little capacity for self-reflection about his own speech and actions. Some have described Trump as a textbook case of narcissistic personality disorder. Whether or not that is how you want to label him, he certainly has no problem publicly promoting cruelty. And, a subset of the American population responds positively to his abusive behavior. Here are a few examples: Trump tolerates, and indeed supports physical attacks on opponents who show up at his rallies. He sometimes encourages his supporters to violence by saying that he would like to punch protesters in the face. In the summer of 2015 he promised that if members of Black Lives Matter showed up at his rallies, "they would have a fight on their hands. I don't know if I'll do the fighting myself, or if other people will." That prediction came true in Birmingham, Alabama, in November of last year, when a Black Lives Matter protester, who simply shouted "black lives matter," was roughed up and insulted during a Trump rally. The next day Trump justified the actions of his supporters. "He [the protester] was so obnoxious and so loud" that "maybe he should have been roughed up."

At another rally, this one in Vermont on a frigid January 2016 evening, when confronted with protesters, he told his security people to steal their coats before ejecting them. "Throw them out into the cold ... Don't give them their coats ... no coats ... confiscate their coats."

Part II -- Muslims and Torture Those are specific local displays of Donald Trump's ability to act cruelly and encourage others to do so as well. However, this dangerous trend goes on at a larger scale as well. For instance: Trump has used unwarranted generalizations against groups he is suspicious of -- generalizations that place group members in the sort of danger that comes with public stereotyping. This is particularly true when it comes to Muslims on the one hand and Mexicans on the other. Trump appears to lump all Muslims in the same category as those who, to use his words, are "chopping off our heads in the Middle East." Those who want "to kill us" and "knock out our cities." Such a generalization ratchets up an already dangerous level of Islamophobia and sets the stage for other publicly proclaimed positions such as the closing of U.S. borders to all Muslims until such time as "our country's representatives can figure out what is going on." Actually, there are a lot of people in and out of the U.S. government who already know what is going on. However, because the answer to this question has to do with long-standing, special-interest-driven foreign policies, "our representatives" have, for political reasons, never moved to rectify matters. And, it's questionable whether Trump as president would respond any differently. Trump's generalization about Muslims has apparently helped promote popular acceptance of another particularly cruel and misplaced policy proposal -- the revival of the use of torture (often euphemistically called "enhanced interrogative methods"). Thus, he has recently proclaimed, "Don't tell me it doesn't work -- torture works. Believe me, it works." This was followed by a typical Trumpism: "only a stupid person would say it doesn't work." Just how does he know this with such certainty? Has he ever tortured anybody in order to get specific information? Has he ever been tortured for information he held? Indeed, did he do any research on the subject before passing judgment? The truth about the efficacy of torture is just the opposite. It has been known not to work since the early 18th century when Cesare Beccaria and other Enlightenment figures began to publicly call attention to the fact that there was no evidence that torture produces truthful confessions or other trustworthy information. Most professional interrogators since that time, with the exception of the small cadre of CIA torturers gathered around George W. Bush, have concluded that someone being tortured will tell their tormentors anything he or she thinks will stop the pain, regardless of its veracity. Obviously the consensus of expert opinion on this matter means as little to Donald Trump as it did to George W. Bush. Part III -- Mexicans and Mass Deportation Donald Trump has declared that he wants to deport just about every illegal resident of the United Sates -- of which there is an estimated 11.3 million. Though he claims that he would do this "humanely," the size of such an operation would certainly entail the uprooting of thousands of families and the impoverishment of hundreds of thousands of individuals. In other words, it is one of those socio-political operations that cannot help but result in acts of official cruelty and the encouragement of dangerous xenophobic sentiments. Most of the immigrants at risk are people from Mexico who cross the southern U.S. border clandestinely. Trump's solution is twofold:

1. Build a wall along that roughly 2000-mile border. "I will build a great wall -- and nobody builds walls better than me, believe me -- and I'll build them very inexpensively. I will build a great, great wall on our southern border, and I will make Mexico pay for that wall. Mark my words." In addition he would add 25,000 new immigration agents and deploy drones to watch the border.

2. Deport all the Mexicans who are illegally resident in the U.S., most of whom, according to Trump, come from the dregs of Mexican society. "When Mexico sends its people, they're not sending their best," Trump said. "They're sending people that have lots of problems...they're bringing drugs, they're bringing crime." This belies the research that shows that most immigrants are more law abiding than native citizens.

Related Topic(s): Campaign Ethics; Campaign Rhetoric; Cruelty; Donald Trump; Mexicans; Muslim; Politics; Torture, Add Tags
Add to My Group(s)
Go To Commenting
The views expressed herein are the sole responsibility of the author and do not necessarily reflect those of this website or its editors.