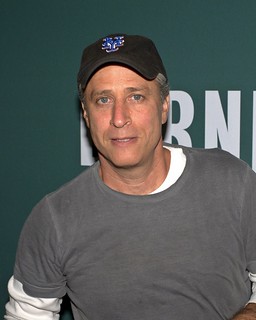 There are moments in history that draw commentary out of the most reticent and taciturn. I am neither, just unusually provoked by Jon Stewart's efforts with former New York Times reporter, Judith Miller, for whom people like me have immeasurable disdain. The partially encouraging news is that Stewart apparently feels a similar regard. I write because this missed moment was so unusual and so important that it required substantial preparation which, if it took place, was either ill-directed or unproductive.

Jon Stewart is capable of greatness. He is also capable of failure and self-criticism; his chagrin at his performance with one of the modern era's most famous mass murderers, Donald Rumsfeld, seemed heartfelt, but it was entirely well-founded. With what was he presented in the person of Judith Miller? There before him trying to sell a book containing her defense of her own iniquity was a reporter for the most influential newspaper in the world who apparently admits that she was used by the forces of war and aggression and who admits that she got the story wrong based upon faulty intelligence. Can anyone remember a similar occasion?
Mr. Stewart, why could you not have said something like this?:
Ms. Miller, I am going to admit that it is quite easy to be critical in hindsight, but as I understand it, you do not at this time suggest that you did not perform a vital function in enabling the Bush Administration to commit the war crime of aggression and involve itself in the worst foreign policy blunder in any living person's memory.
You acknowledge that it was essential for that Administration to get the American people behind any military action in Iraq. And you do not distance yourself from the role you played in that endeavor.
There are a number of possibilities for why you would do such a thing. The first, historically a long way from an outrageous accusation, is that you are a compensated or uncompensated agent of the CIA which had a job for you to do that you agreed to perform. Under such an arrangement, one hopes you would have known that whatever intelligence you were being fed was unreliable, whether or not you cared in the slightest if it was true.
The second possibility is that you are an honest journalist who was seduced by her proximity to power and whose analytical powers were compromised by the loss of objectivity which comes from such a position. In that case, you may have cared whether what you were saying was true but been unable to make the determination.
Another explanation for your performance hinges on your ideological worldview; your ideas are so in line with those of Dick Cheney, Donald Rumsfeld, and the other neocon stalwarts that you, deep down, would feel just fine considering yourself a warrior in alliance with their objectives. You have in fact known Saddam Hussein to be evil for a very long time, and any steps taken in the direction of his erasure from the world stage are worthy and right. The considerations of law, or morality, or the long-term consequences of any action aimed at his end are someone else's business; you are just a reporter.
Since your path was trod by almost all of what passes for journalism in this country, the question that the world needs an answer to is: since you ended up doing the worst thing that you were capable of, paving the way for a heinous war crime whose devastation will take generations to reckon, was there ever a moment when you, your co-writer, and your editor gathered together to consider whether or not you might be on your way to doing precisely that, the very worst thing a journalist can do?

Bill Veale retired as Chief Assistant Public Defender in Contra Costa County, California in 2006 after 30+ years of trying death penalty cases and the like. In 2008, he sued Cheney, Rumsfeld and General Richard Myers for complicity in the (more...)