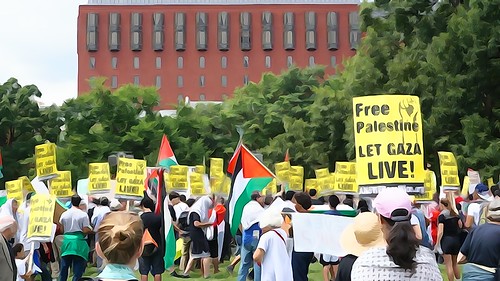 I have been boycotting products for political reasons since 1973, when the United Farmworkers (UFW), beset by a campaign by the then totally corrupt International Brotherhood of Teamsters to challenge their union in collusion with the California grape and lettuce growers, restarted their nationwide grape boycott, eventually adding lettuce and wine producers.

I was living in New York City and volunteered in picketing stores and produce stands in Manhattan urging shoppers not to buy grapes or lettuce that didn't come from farms with a UFW label. The NYC campaign was being headed up by Dolores Huerta, the inspirational UFW vice president under President Cesar Chavez.

Since those days, I've routinely boycotted products in support of political causes Dow Chemical products because of its production of the criminal napalm bombs and hand-held napalm throwers used by American forces in Vietnam, clothing manufactured by the union-busting JP Stevens apparel company, tuna that's caught in nets that snare and drown porpoises and so on. The list can seem endless sometimes of products that should be boycotted for important political, labor, environmental, anti-war and other reasons. (Here's an example of a current list of products and services deserving to be boycotted for one good reason or another. Take your pick.)

Boycotts as a political act are as American as apple pie"and table grapes.

But now Congress, larded with corrupt politicians of both parties besotted by bribes called campaign contributions, and frightened by the threat of attacks by powerful entities with money to burn on negative ads against them in election years, as well as many similarly corrupt state legislatures (26 at recent count), are cravenly voting to pass legislation supported by Israel's lobby in the US, the America Israel Public Affairs Committee (AIPAC). These laws criminalize the Boycott, Divestment and Sanctions (BDS) movement that is trying to pressure Israel to stop oppressing Palestinians in the occupied West Bank, Gaza and in Israel, and to stop stealing Palestinian land in the West Bank and return what's already been stolen.

To get an indication of how serious this threat to political activity and free expression is, consider how Bahia Amawi, a public primary school special education teacher in Texas was fired from her job for refusing to sign an anti-BDS oath embedded in her employment contract. Although this American citizen had worked for the Pflugerville School District outside of Austin, TX for over 10 years as a language specialist, her refusal to sign what amounts to a required "Loyalty to Israel" oath akin to the now discredited and unconstitutional anti-Communist USA loyalty oaths common in the McCarthy era and right into the 1960s she was sacked by her employer, which added the clause retroactively to the contracts of its teachers in 2017 after Texas passed an anti-BDS bill banning state agencies from signing contracts with companies (or persons) that boycott Israel.

Other states with similar laws passed since 2015 include Illinois, California, New York"

For the rest of this article by DAVE LINDORFF in ThisCantBeHappening!, the uncompromised, collectively run, six-time Project Censored Award-winning online alternative news site, please to to:https://thiscantbehappening.net/us-politicians-are-selling-out-the-first-amendment-and-their-own-countrys-interests-in-pursuit-of-aipac-cash/

Related Topic(s): Bds Movement; Boycott; Criminalizing Dissent; Criminalizing Protest; Farmworkers; Free Speech; Freedom Of Assembly; Freedom Of Association; Lobbyists AIPAC, Add Tags
Add to My Group(s)
Go To Commenting
The views expressed herein are the sole responsibility of the author and do not necessarily reflect those of this website or its editors.