Why are you there? There being Madison, Wisconsin. I hear this all the time from family, friends, and associates in other cities throughout this great land of the free and brave.

Why the hell don't you get out!

I have learned a great deal about northern liberal towns like Madison. 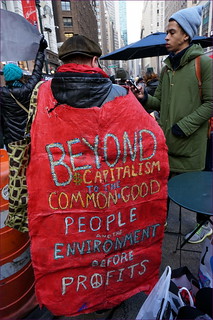 I have taught here at its institution of "higher leaning." I have written for one of its local, free papers, and I have sought "solidarity" among its anti-war, socialist, race- and gender-activist organizations. Solidarity reminds me of the incestuous motif in Edgar Allan Poe's "The Fall of the House of Usher." Brother and sister only. And if there is a threat of miscegenation, better to entomb-to-kill rather than equality, democracy.

I did not come to Madison of my own free will, as they say. If I had options, and did not need a roof over my head or a refrigerator or kitchen cabinets at least partially filled with food or a coat and boots--if I had options back in 2006, I would not have had to accept a part-time teaching position at an institution where the representation of black faculty is hugely less (47 black faculty in 2011, Academic Planning & Analysis report/University of Wisconsin-Madison) than the number of black men incarcerated (43 percent of "the new adult prison placements in Dane County") (Race to Equity report, 2013),

"Wisconsin locks up a higher percentage of its black men than any other state. Not only higher, but much higher" (The Capital Times, September 19, 2013). The Employment and Training Institute at the University of Milwaukee notes that over 12 percent of black men are at those other institutions in Milwaukee and the rural lands of Wisconsin. The article refers to the drug war. The disproportional round-up of blacks. The usual suspects. I know as well as the majority of residents here in Madison that there maybe just a bit of illegal drug use happening on at the campus where where that report was generated.

Not to mention the flagship campus of the UW-Madison.

Here in Dane County, Madison has "10 percent of black men ages 18 to 54" in prison compared to 0.46 percent of white men (as of 2006, compiled by Pam Oliver, UW Sociology). Black men are "21 times more likely to be incarcerated than white men."

It would seem that there is a pattern here, you would think.

When I first arrived in Madison, I asked: where are the black people? I was told, rather flippantly, that I could find the men, at least, in prison. Young black mothers also pointed me in the direction of public-school classrooms where black children were more likely to encounter police officers not-so-friendly, or more likely to be subject to psychiatric facilities and placed on a regiment of drugs for behavioral problems while I am forever witnessing white children at grocery stores, for example, throwing nothing short of a temper tantrum. But one behavior is "abnormal" and the other is "normal."

The Capital Times, again, for April 1, 2014, citing a national study, reported that Wisconsin was the worst state for black children. The state ranks last in the "disparity between white children and their non-white peers."

For the rest of us, black women, single or married, mothers, senior, homeless, disabled, former veterans, and troublemakers--there is the mental-health industry.

The opinion of the Chief Justice Roger Taney in the Dred Scot case still echoes in our reality here today. He said, and I paraphrase, that the black has no right that the white man is bound to respect.

Related Topic(s): Class; Corporations; Criminalizing Dissent; Culture; Economic; Empire; Police; Poverty; Race; Resistance; (more...) White Privilege; White Supremacy, Add Tags  (less...)
Add to My Group(s)
Go To Commenting
The views expressed herein are the sole responsibility of the author and do not necessarily reflect those of this website or its editors.