Benjamin Netanyahu and his wife are both facing potential charges, raising questions about the prime minister's future. 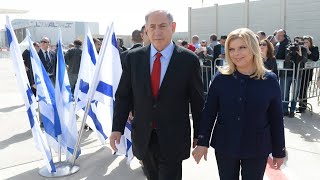 The threat of criminal indictment that has hung for months over Benjamin Netanyahu, Israel's prime minister, loomed much larger this weekend as it was announced that his wife, Sara, faced potential criminal charges.

Israel's attorney general, Avichai Mandelblit, said on Friday that he intended to indict Sara Netanyahu with fraudulently diverting some $100,000 from public funds. The charges carry a maximum sentence of five years in jail.

The case, one of a number of corruption investigations the couple face either jointly or separately, concerns allegations that the prime minister's wife billed the state for excessive sums in running his official residence.

Mandelblit has taken the unusual step of allowing Sara Netanyahu a hearing to present her side of events before indictment -- a concession normally reserved for public officials. Many observers assume she will ultimately get a plea deal to avoid jail time.

Benjamin Netanyahu quickly took to Facebook to call the draft indictment "absurd" and "baseless," adding that his wife was "a brave and honest woman and has never done anything wrong ... She spends a lot of time helping children with cancer, Holocaust survivors and lone soldiers."

The charges are likely to strengthen suspicions against the Israeli prime minister as he tries to stave off four other corruption investigations.

Michel Warschawski, an Israeli political analyst, said that Sara Netanyahu's indictment would seal the prime minister's fate. "This will serve as an aperitif before the main meal," he told Al Jazeera. "Far too much evidence has mounted up against Netanyahu. The police and justice system can only drag their feet for so long."

According to reports in Israeli media, police sources believe the way the Netanyahus ran their official residence reflected a pattern of behaviour.

In one of the other corruption scandals, the pair are suspected of receiving gifts from wealthy businessmen worth hundreds of thousands of dollars, including jewellery, pink champagne and luxury cigars.

Police reportedly believe they can show that the gifts were accepted as bribes -- in return for the Israeli prime minister peddling influence on the tycoons' behalf.

Last week, unnamed law enforcement officials told Israeli media that they would recommend Netanyahu's indictment before the year's end in this and another investigation, regarding backroom deals to influence media coverage.

The ultimate decision to charge the prime minister, however, rests with the attorney general, who was appointed by Netanyahu. He has been widely accused of drawing out the investigations.

The inquiry into Sara Netanyahu began two years ago, following a report by Joseph Shapira, an official watchdog known as the state comptroller, into management of the prime minister's official residence in Jerusalem.

Shapira discovered massively inflated spending. He accused the Netanyahus of using public money to furnish and improve their private home in Caesarea and to pay for the care of Sara's elderly father. Sara was also suspected of pocketing thousands of dollars in refunds from bottle returns, and exaggerating dinner party numbers to justify hiring private chefs.

Related Topic(s): Benjamin Netanyahu; Corruption; Criminally Complict; Gifts; Indictments; Sara Netanyahu, Add Tags
Add to My Group(s)
Go To Commenting
The views expressed herein are the sole responsibility of the author and do not necessarily reflect those of this website or its editors.