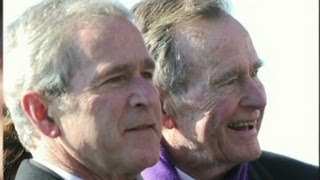 As the newly dead George Herbert Walker Bush luxuriates in the accolades of America's bipartisan political/media establishment, I thought it meet to look again at the article below, which I wrote in 2006, detailing one of the great glories of his great and glorious reign: the thwarting of the investigation into BCCI, "one of the largest criminal organizations in history." Strangely enough, I saw a now-familiar name popping up as one of the key figures in this nefarious cover-up operation by the Bush crime family (who make the Trump Gang look like the two-bit pikers they are): one Robert Mueller, champion of the Resistance and incorruptible shield of the Republic.

Anyway, here's the lowdown, from 12 years ago. You probably won't see these facts mentioned in any of the upchuckings of hagiography being churned out by our tough, savvy seekers of truth in the Fourth Estate.

This week, the Washington Post offered a grim overview of Iraq's epidemic of mental disorders, produced by years of war, upheaval and neglect ("Iraq's Crisis of Scarred Psyches," March 6). Of course, much of this psychological damage is the fault of Saddam Hussein and the brutal regime he installed: militarism, tyranny and the gross deceit required to maintain them wreak serious havoc on the human mind, as Americans are coming to know too well. But there is a deeper history behind the unfolding nightmare in Iraq -- a method to the induced madness -- that is inextricably linked to the political and personal fortunes of two sinister twerps named George Bush.

As historian Roger Morris has usefully reminded us, Saddam's regime was midwifed by not one but two coups supported by the CIA: the first brought the Baathist Party to power, the second, an internal coup, engineered the ascension of Saddam's family-centered faction to the top. It is unlikely that Saddam would have ever been a position to impose his perverted militarist vision on Iraqi society without the assistance of the elitist operatives whose headquarters now proudly bears the name of George Herbert Walker Bush.

Let us also remember that Saddam was sustained in his harsh rule with the eager support of Ronald Reagan and the aforementioned George H.W. Bush. Indeed, the latter's passionate embrace of Saddam seemed to know no bounds, so avidly did Bush ply the dictator with money, agricultural credits (which allowed Saddam to use his scarce hard currency for weapons) and advanced technology -- including "dual-use" gear for weapons of mass destruction -- despite the strong warnings of his own Cabinet against such reckless policies, and a 1989 report by the CIA that Iraq had greatly accelerated its nuclear program, and was now the world's largest maker of chemical weapons.

Bush also used the global criminal network of the Bank of Credit and Commerce International (BCCI) to secretly funnel cash and weaponry to Saddam -- then intervened to quash federal investigations of the scam. What was BCCI? Only "one of the largest criminal enterprises in history," according to the United States Senate. What did BCCI do? "It engaged in pandemic bribery of officials in Europe, Africa, Asia and the Americas," says journalist Christopher Bryon, who first exposed the operation. "It laundered money on a global scale, intimidated witnesses and law officers, engaged in extortion and blackmail. It supplied the financing for illegal arms trafficking and global terrorism. It financed and facilitated income tax evasion, smuggling and prostitution." Sort of an early version of the Bush Regime, then.

The Italian bank BNL was one of BCCI's main tentacles. BNL's Atlanta branch was the primary funnel used to send millions of secret dollars to Saddam for arms purchases, including deadly chemicals and other WMD materials supplied by the Chilean arms dealer Cardoen and various politically-connected operators in the United States like, weapons merchant Matrix Churchill.

As soon as the BNL case broke, Bush moved to throttle the investigation. He appointed lawyers from both Cardoen and Matrix to top Justice Department posts -- where they supervised the officials investigating their old companies. The overall probe was directed by Justice Department investigator Robert Mueller. Meanwhile, White House aides applied heavy pressure on other prosecutors to restrict the range of the probe -- especially the fact that Bush cabinet officials Brent Scowcroft and Lawrence Eagleburger had served as consultants for BNL during their pre-White House days as spear-carriers for yet another secretive international front that profits from war, weapons, and the avid greasing of highly-placed palms: Kissinger Associates. The U.S. Senate later found that the probe had been unaccountably "botched" -- witnesses went missing, CIA records got "lost," all sorts of bad luck. Most of the big BCCI players went unpunished or got off with wrist-slap fines and sanctions.

One of the White House aides who unlawfully intervened in the BNL prosecution was a certain factotum named Jay S. ByBee. In 2004, said factotum was appointed by George W. Bush to a place on the federal appeals court -- a lifetime sinecure of perks and power. Mueller, meanwhile wound up as head of the FBI, appointed to the post in by George W. in July 2001. Well done, thou good and faithful servants!

Then came Bush's "Gulf War," when he turned on his prote'ge after Saddam made the foolish move of threatening the Kuwaiti royals -- Bush's long-time business partners, going back to the early 1960s. Saddam's conflict with Kuwait centered on two main issues: first, his claim that the billions of dollars Kuwait had given Iraq during the war with Iran was simply straightforward aid to the nation that was defending the Sunni Arab world from the aggressive onslaught of the Shiite Persians. The Kuwaitis insisted the money had been a loan, and demanded that Saddam pay off. There was also Saddam's claim that Kuwait was "slant-drilling" into Iraqi oilfields, siphoning off underground reserves from across the border. These disputes raged for months; a deal to resolve them was brokered by the Arab League, but fell apart at the last minute when Kuwait suddenly rejected the agreement, saying, "We will call in the Americans."

How worried was Bush about the situation? Let's look at the historical record. In the two weeks before the invasion of Kuwait, Bush approved the sale of an additional $4.8 million in "dual-use" technology to factories identified by the CIA as linchpins of Hussein's illicit nuclear and biochemical programs, the Los Angeles Times reports. The day before Saddam sent his tanks across the border, Bush obligingly sold him more than $600 million worth of advanced communications technology. A week later, he was declaring that his long-time ally was "worse than Hitler."

Yes, the Kuwaitis had called in their marker. Like a warlord of old, Bush used the US military as a private army to help his business partners. After an extensive bombing campaign that openly -- even gleefully -- mocked international law in its targeting of civilian infrastructure (a tactic repeated in Serbia by Bill Clinton -- now regarded as an "adopted son" by Bush), the brief 100-hour ground war slaughtered fleeing Iraqi conscripts by the thousands -- while, curiously, allowing Saddam's crack troops, the aptly-named Republican Guard, to escape unharmed. Later, these troops were used to kill tens of thousands of Shiites who had risen in rebellion against Saddam -- at the specific instigation of George Bush, who not only abandoned them to their fate, but specifically allowed Saddam to use his attack helicopters against the rebels, and also ordered US troops to block Shiites from gaining access to arms caches. It was one of the worst, most murderous betrayals in modern history -- and has been almost entirely expunged from the American memory.

Then came the Carthaginian "peace" of the victors -- Iraq sown with the salt of sanctions, which led to the unnecessary death of at least 500,000 children, according to UN's conservative estimates. The sanction regime actually strengthened Saddam's grip on Iraqi society, as the ravaged people were reduced to surviving on government handouts of food.

Now another George Bush has visited havoc on Iraq, launching a war that has led to the complete breakdown of Iraqi society, to year after year of deprivation, religious extremism, illegal occupation and unbridled violence. The psychological hell wrought by this sinister consortium -- the CIA, the Bushes and Saddam -- is unimaginable, a slowly-unfolding atrocity that will chew up victims for decades to come.

Related Topic(s): Bush Crime Family; Bush George Herbert Walker; Bush War Strategery; Bushies Under The Microscope; Iraq; People Saddam Hussein, Add Tags
Add to My Group(s)
Go To Commenting
The views expressed herein are the sole responsibility of the author and do not necessarily reflect those of this website or its editors.