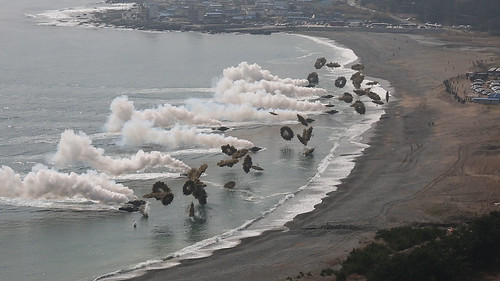 I'm no fan of police states or of dictators, whether in Russia, China, North Korea or under development here in the United States, but let's at least be honest about what's behind the news that President Trump has agreed to meet with North Korean leader Kim Jong-un, the man he has been calling "fat" and "Little Rocket Man."

The corporate media in the US has been lavishing at times grudging praise on Trump, claiming that it was his "harsh sanctions" and threatening military moves around the Korean Peninsula, and leaked White House talk of "bloody nose" incursions into North Korea, or threats to destroy that country that forced Kim to agree to talks.

The reality is quite the opposite, though. While we may be loath to admit it, that truth is that it has been Kim's dogged persistence, in the face of US sanctions, boycotts and threats, in testing and developing both a credible nuclear arsenal of atomic and thermonuclear weapons, and in demonstrating that he has missiles that can reach US targets, probably including the lower 48 states.

With as many as 60 such deliverable weapons, according to some estimates, Kim's North Korea has reached a point where the only way the US could hope to undo his accomplishment would be an all-out war against the North and is one-million-man army, its dug-in artillery, and even then the chances of doing this without North Korea launching at least some of its nukes would be slim.

Credit should go also to South Korea's President Moon Jae-in, who has defied the US by reaching out to Kim, first by inviting North Korea to participate in the Winter Olympics just completed successfully in South Korea, including the fielding of a joint North and South Korean women's hockey team, and then offering to meet directly in the North with Kim, after which Moon delivered Kim's invitation to meet with President Trump.

The US had opposed the Olympics invitation, and has been pressuring Moon not to meet with Kim, trying to queer the deal by upping the sanctions against the North, but failed. All along, amid calls in South Korea and by both China and Russia, for the US to negotiate with Kim, the Trump administration, like those before it, has been demanding that North Korea first get rid of its nuclear weapons before any negotiations -- a demand that it knew meant no negotiations.

Now, suddenly, faced with a real offer of head-of-state face-to-face negotiations, and a reported offer by Kim to get rid of the country's nuclear weapons if the US gives a guarantee not to attempt to overthrow the North Korean government, the US has been forced to accept.

Ever since the Korean War fighting ended in an armed truce in place on July 27, 1953, the US has refused negotiations for a real peace treaty, leaving that brutal war technically still on for an astonishing 65 years. During that time, the US has maintained what amounts to an occupation of South Korea, initially propping up a series of brutal dictators, and then simply exercising military authority over South Korea's own military forces, courtesy of a 1950 UN Security Council Resolution making the US the supreme commander of UN forces dispatched to combat the North's military.

It's been a great deal for the US, which has been able to maintain a strong military presence of some 30-50,000 troops, naval bases and air bases, and now a THAAD anti-missile array in South Korea, under its own command, on the Korean Peninsula quite near both China and Russia, and to help justify continued massive military budgets even as China was joining the world economic community and Russia was abandoning the Cold War.

But with North Korea now demonstrably a nuclear power, at least on a par with Pakistan and India, and approaching perhaps even Israel, at least in the number of its nuclear weapons, the US is being forced to abandon war as an option for denuclearizing that country.

With the US invasions of Libya and Iraq, the reality has been impressed on nations of the world that are on America's "sh*t list" that "if you don't have nuclear weapons, you're toast." North Korea's leaders, including Kim's father, took that lesson to heart and worked assiduously to develop nuclear weapons while they could.

Related Topic(s): Korea; Korean War; North Korea; North Korea And South Korea Talks; Peace; Trump Foreign Policy; Trump Threats, Add Tags
Add to My Group(s)
Go To Commenting
The views expressed herein are the sole responsibility of the author and do not necessarily reflect those of this website or its editors.