Copyrighted Image? DMCA
For those who blessedly don't know, Kent Kovind Hovind is a leading voice in the young-earth creationist movement and the builder of the Dinosaur Adventure Land Creationist Theme Park in Pensacola. Where you can ride 'the Leap of Faith' swing. Well, after they reopen, which will be once they get enough money to pay the taxes they 'forgot' to pay. 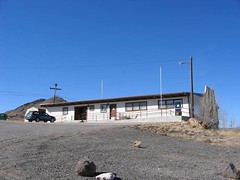 (Image by Unknown Owner)   Details   DMCA
But back to the beginnings... Hovind claims to be a scientist, however his MA and PhD degrees were granted by Patriot Bible University, which is an unaccredited fundamentalist Christian Correspondence school (it claims it is "Christian" accredited), authorized ONLY to issue "religious degrees'.

Patriot Bible University. All of it. The whole thing. You don't need a lot of room to accept a check and send a diploma! When god is on your side, you don't need all those teachers, buildings, books and silly human stuff.

Various criticisms have been made of Hovind's dissertation, including charges of incompleteness, low academic quality, poor writing, poor spelling, and ungrammatical style. The lack of quality was described, in part, by the fact that "the pages are not numbered; there is no title; of sixteen or so chapters in the index only the first four are finished; misspellings are rampant ("Immerged" for emerged and "epic" for epoch "tentable" for testable are three examples); and the single illustration was apparently cut out of a science book with scissors and fastened to the thesis with glue or tape."

Hovind's "dissertation" has been a closely guarded document; contrary to the accepted practice of releasing PhD theses, Patriot and Hovind have refused to share his thesis. However, it is available here. (Note to OpENews readers: The infamous document had been on Wikilinks for some time but apparently has been removed; after extensive searching for a free viewing, I found it at the above link. If you want to write about it, I suggest saving a copy of the pdf for yourself.)

(Image by Unknown Owner)   Details   DMCA
I read the first dozen or so pages and skimmed through the rest. I played a game I rolled my scroll wheel to a random page and read it. Unbelieveable. Each page is truly a gem of inconceiveable irrationality. I would not have allowed my children to hand in something this poor in grade school, much less expect such a pitiful effort for a doctoral thesis.

Hovind's 'science' is laughable. He has no grasp whatsoever of what evolution is, yet he argues against it a la the Kirk Cameron school of wide-eyed disingenuity.

It either has not been proofread, or proofed by someone as ignorant as Hovind himself. Any page is replete with mistakes and/or absurdities usually both.

The last sentence on p63 into p64 is: "Microevolution is small little variations between the species that have been in the genetic structure by." Yep, that's it.

On the same page (pages are unnumbered, but it is page 64 on the pdf) in ONE sentence he says, "In Scientific America" Allen Goode said " " and he provides a short but supposedly direct quote. The magazine is Scientific American, and it is Alan Guth who wrote the May 1984 article on Inflation that Hovind quoted. If he had the document to make the quote, he had the name of the publication and the name of the author that he could have copied. This degree of sloppiness is apparent throughout, though even if this had been a grammatically stellar document, the so-called science within it would make it unworthy of even a bad comic strip.

Folks no where else will you find this kind of coverage of evolution - from the fall of Satan! Whoa. That's deep as hell!

Don't miss the illuminating discussion of the light spectrum on pdf pages 80-83, including his POEM about atheists and blind men. It reduces me to speechlessness:

They tell me that grass is some sort of green.
It looks like the rest of the world that I've seen!
It tastes a lot different than jelly or cheese
(If I smell it too long it sure makes me sneese).

Don't take my word for it. Read it" if your stomach can take it. It would be funnier if it weren't that there are people who actually believe what this fool says. There is a tremendous amount of writing about this document. I've picked one I enjoyed- google will deliver many more... read a commentary on the document here.

Carol is a writer - The Philadelphia Science Examiner - http://www.examiner.com/x-49657-Philadelphia-Science-Examiner, and the Philadelphia Freethought Examiner http://www.examiner.com/x-44168-Philadelphia-Freethought-Examiner; a painter and (more...)
Related Topic(s): ATHEIST; Evolution; God; Satan; Science; Teaching; Writing; Writing, Add Tags
Add to My Group(s)
Go To Commenting
The views expressed herein are the sole responsibility of the author and do not necessarily reflect those of this website or its editors.