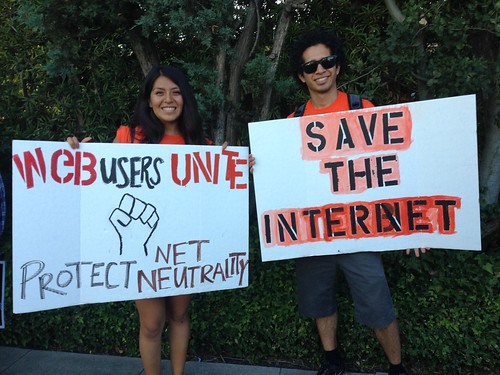 Ajit Pai, the former Verizon lawyer who is chair of the FCC, went too far last Thursday in undermining the Internet when he led the dismantling of net neutrality rules. As a result, he has fueled the energy needed to protect Internet rights. It is time for Movement Judo, where the energy created by the overreach of the FCC is turned into energy not just to overturn the FCC's decision, but to also create the Internet we need in the 21st Century.

Over the past few months, there has arisen an epic mass mobilization in support of net neutrality and national consensus, with a University of Maryland poll finding 83% support for the Internet being open and equal to all. There was a record number of comments to the FCC on this issue over the summer. More than 1.2 million calls and 12.5 million emails went into Congress through the coalition site, Battle For the Net, and more than 700 protests were held across the country for net neutrality on December 7. The Internet is important to all of us and politicians who do not side with the people will pay a heavy political price.

This week, three FCC commissioners gave a handful of mega-corporations the power to control the speed of websites and where we go, what we see and what we pay for access to content on the web. The battle for the Internet is not over -- it has just begun, and we will go into next steps to protect our Internet, but first we will start with a bigger question -- what should the Internet be in the 21st Century?

What Kind of Internet Would You Like to See?

If the movement for Internet equality and justice were to put forward a vision for the Internet in the 21st Century, we could make that vision into a reality.

We start with the view that the Internet is a key venue for Freedom of Speech. It is a place where First Amendment protections should apply. Political speech should not only be protected in print and television, but it should also be protected in the digital world, including websites, video, social media and new outlets we cannot yet imagine.

Political speech on the Internet has been vital in recent years to putting new issues on the political agenda. Video of police violence, sometimes resulting in death, have brought these issues, that have been ignored for years, to the center of political debate. The movement for Black Lives Matter has resulted in prosecution of police, widespread discussion and policy changes; e.g., police wearing cameras, new laws and policies.

The occupy encampments that swept the nation in 2011 would not have occurred without the Internet. Early in Occupy Wall Street a small number of people camped out in Zuccotti Park. It was on a weekend march where protesters were arrested and placed behind a mesh barrier by the police that occupy exploded. One high ranking officer went toward the captives and pepper sprayed them. This was caught on camera by multiple individuals and shared on the Internet. When the police tried to claim the protesters were being violent or threatening, the videos showed the opposite to be true. Seemingly overnight, hundreds of occupy encampments sprang up throughout the country. The political meme of the 99% became widespread and the issue of income and wealth inequality became part of the political dialogue.

These are two examples of many showing how equal Internet access has become critical to free speech and political development.

Part of free speech includes commercial speech and the Internet has been an essential element in new products and services that would not have otherwise reached enough people to support new businesses. This is why outside of the telecoms and cable companies, net neutrality is supported by businesses, especially small start-up enterprises.

The Internet has become a basic human right. The Internet is essential to function in modern society. People sign up for health insurance, apply for jobs, do research for school, develop income ... many activities of life are now conducted online.

Human rights must be people-centered, as Ajamu Baraka writes, where they are "based on the popular needs and democratic aspirations of the people." There are basic principles that are always part of human rights standards that should be applied to the Internet in the 21st Century, including:

Universality: Human rights must be afforded to everyone, without exception. People are entitled to these rights by virtue of being human. Currently the Internet does not meet this standard as 39 percent of black, Latino, working-class and people living in rural areas do not have Internet access.

Kevin Zeese is co-chair of Come Home America, www.ComeHomeAmerica.US which seeks to end U.S. militarism and empire. He is also co-director of Its Our Economy, www.ItsOurEconomy.US which seeks to democratize the economy and give people greater (more...)
Related Topic(s): Corporations; Equality; FCC; Internet Regulation; Internet Shutdown Or Censorship; Politicians, Add Tags
Add to My Group(s)
Go To Commenting
The views expressed herein are the sole responsibility of the author and do not necessarily reflect those of this website or its editors.