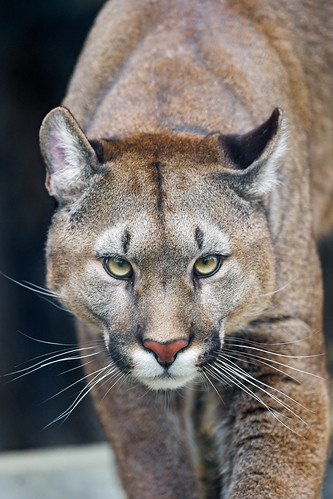 I have a friend who had a big dream recently that was full of apocalyptic symbolism. In her dream there were catamounts prowling the city streets. It was very ominous because nobody could be sure where they were going to appear next. They would manifest on a crosswalk and vanish just as they do in the forest. (They were even in the buildings in her dream.) Here in Vermont catamounts are supposed to be extinct but every once in a while there are sightings. A friend of mine and his wife saw one cross right in front of their car on a remote country road and I once came across a perfect footprint about the size of my palm in the silt of a dry streambed when I was walking in the mountains off-trail and it was not a bear-print. The image of the great cats moving into the city also reminds me of the beginning of Shakespeare's "Julius Caesar" when Casca reports to Cicero that he encountered a lion on his way to the capital, a strange portent in itself, but the strangest part, the most unnerving part was, the lion ignored him. This picture, of a preoccupied lion walking through the streets of Rome, has stayed with me for 40 years. It always felt eerily timely to me. Would any sane person deny that we are living in Apocalyptic times, now more than ever, with the president (our Caesar) lying in a hospital bed with Covid? Like Julius Caesar, he is tragically clueless and has been ignoring all the omens of a world that is hanging in the balance. He may not have a soothsayer, or a wise and prescient wife, but he consults the polls (his oracle), and most polls are stacked against him.

A couple weeks ago I posted the poem "Just another poem about the Apocalypse", which I invite the reader to reread. One thing I want to point out is how fast the poem is moving right from the start. I want the reader to jump in and feel swept along, nervous and defensive, glancing over their shoulder, distrustful of every shadow. I also want the poem be light-weight rather than oppressive or heavy-hitting. The chorus and stanzas are embedded with lines that are supposed to make us smile, such as "duck the clothesline" and "toss your wallet in too". I wanted all the foreboding in the poem to feel like it might feel to walk on water. . .which we are doing, metaphorically speaking. My sense is that we are being held up by a kind of powerful surface tension, like Peter in the Bible, that is sustained by the power of our belief in . . . something. What is that something? Maybe it is something as basic as a sense of purpose, or believing that the human race is basically good. . .

Much anti-Capitalist, anti-American, progressive, green or reformist journalism, fiction and poetry is not helpful because it doesn't see beyond its own rhetoric. Just because it is "progressive" or "left-leaning" doesn't mean that it is good for us. Some of the well-meaning, supposedly enlightened rants I have read are toxic. They aren't meant to inform and educate us but to agitate, spook or upset. I often vacillate between wanting to rock the boat (agitate) and stepping back or, borrowing the hawk's wings (which I can do as a poet), take in the broader view of what is happening between horizons. We aren't on one side or another. I'm really not comfortable with picking sides. Toxic language, toxic ideas are toxic no matter who is spilling their guts or spewing acerbic adjectives and incendiary platitudes. Reading incendiary language from someone in one's own tribe or on one's side sometimes feels sticky to me, like I'm stuck in a web of words. How do we avoid becoming spiders, weaving webs to catch unsuspecting readers.

Sometimes you just have to trust your instincts. Posting poems on the internet (or on a blog), as opposed to writing poems for eventual publication, is a whole other kettle of fish. When I post on the internet I am writing for the moment. It's like making a drawing out of a squiggle, a game we used to play with my grandmother. But what is a squiggle? Well, if it is truly spontaneous, as my grandmother taught us, it's actually a gestalt. It is the quintessence of a whole aesthetic, the first inkling of a vision. A squiggle for a poet might be a fragment of a sentence, a phrase from a conversation that sticks in our ear, or a weird fragment that is all we remember of a dream. As I get older I trust these poetic squiggles to catalyze my process.

Turning a squiggle into art or a fragment of a sentence into a poem isn't easy. Let me say a little more about what I mean by starting with a gestalt. A gestalt is the germ or initial sign of something more or less complex that the gestalt accurately prefigures. In certain traditional Zen landscape-art (certainly not all), the artist is able to capture the essence of mountain or hermit or river valley in the most humble of brushstrokes and they leave it like that. It's finished. It's enough. One of the things that makes a poet or an artist a master is knowing when to push on or when to stop, when to lift the brush.

Recently I was with some friends (our Covid bubble friends) and someone asked the question, "What has Covid taught you?" or maybe it was, "What have you learned from Covid?" I would say that Covid has changed my relationship to my art. I trust my squiggles more. I can be more experimental. But Covid has changed me as an artist in another way. It has radicalized me, as a spokesperson for radical change but it has also seasoned me, tempered me. It has somehow helped me weigh my words more carefully because how I feel about our situation has changed, not my worldview, but how I live with my worldview. My worldview derives from my gestalt, which hasn't changed since I was a kid. What has changed is, with Covid, many of my worst "fears" have been confirmed, things I was dreaming about when I was feverish at the tender age of 5 or 6. The times are telling me, You were right.

So, how has that affected me? I talk less, I swagger less, I rarely rant, I listen more, I reflect more, I read the omens, I trust my squiggles, I trust my instincts and, if I pass a big cat on the street that looks preoccupied, I will give it a wide berth.

Related Topic(s): American Empire; Corona Virus Coronavirus Covid-19; Fall Of Neocon-GOP Empire; Pandemic Restrictions; Poetry, Add Tags
Add to My Group(s)
Go To Commenting
The views expressed herein are the sole responsibility of the author and do not necessarily reflect those of this website or its editors.