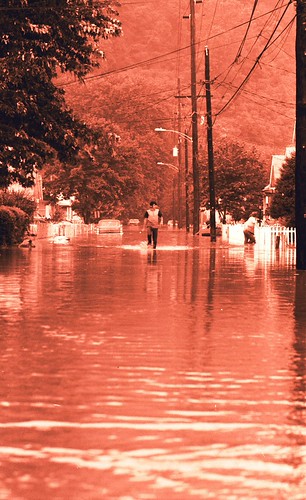 Think of Covid-19 as a trial run for how American society will be able to respond to the crises that climate change will create for us in the coming years and decades. Considering how the trends towards economic inequality and neoliberal austerity will no doubt be far more pronounced during these future catastrophes, all the deficiencies of our current system can also be expected to be more pronounced. This will greatly exacerbate the dangers that we can expect.

In the present, the country's infrastructure and governmental systems are highly unprepared for the crises that have appeared this year. The U.S. has had by far the most Covid-19 deaths, with the country's austerity-ravaged healthcare and social welfare systems unable to let lower class people effectively shelter from the virus or get adequate medical help. In California, where fires are now making the pandemic combine with the impacts of climate change, neoliberalism is doing a double amount of damage. The pandemic has created a firefighter shortage with the prisoners who would normally be doing labor for the state are under lockdown and unable to fight the fires. The country's failure to effectively combat the virus and reliance on convict slave labor have led us to this point.

In the future, these kinds of converging capitalist disasters-breakdowns of public services, social Darwinist neglect of the needs of the poor, harmful bureaucratic shortcuts as a result of austerity and privatization-will create exponential amounts of chaos. The Pentagon agrees, and it fully expects this to happen. A 2016 Pentagon training video warned about an "unavoidable" dystopian scenario where failing infrastructure, growing slums, and widespread unemployment prompt the military to intervene in newly unstable areas. A report from last year that was commissioned by the Pentagon explores these dangers further, assessing that:

The power grid that serves the United States is aging and continues to operate without a coordinated and significant infrastructure investment. Vulnerabilities exist to electricity-generating power plants, electric transmission infrastructure and distribution system components"Effects of climate abnormalities over time introduce the possibility of taxing an already fragile system through increased energy requirements triggered by extended periods of heat, drought, cold, etc. If the power grid in- frastructure were to collapse, the United States would experience significant Loss of perishable foods and medications"Loss of water and wastewater distribution systems"Loss of public transportation systems"Loss of fuel distribution systems and fuel pipe-lines.

In line with the ways that recent hurricanes have accelerated the militarization of American society, the Pentagon again anticipates that the military will have to step in more and more as the collapse unfolds. But as the 2019 study acknowledges, the military will be met with limitations on what it can do, or rather on what the capitalist ruling class that controls the military is willing to do. Instead of calling for social welfare expansions and efforts to combat climate change, the Army report merely defines the government's role in responding to the climate crisis through a narrow lens of "national security." While the military will help give humanitarian assistance to the poor when this is deemed necessary, the capitalist state's first priority will be to maintain order, which means maintaining the existing class hierarchy.

In this future where the capitalist state and its instruments of armed force shift their focus towards preventing a lower class uprising amid growing instability, the living standards of the lower classes will be ever more reduced. Social services will continue to be cut off, while food and other essential goods will become harder to buy amid droughts and economic downturns. The state will be ever more transformed "into an instrument of predation," as political scientist Robery Bates describes the role of a state when destabilization forces it to abandon the common welfare. As foreshadowed by the last decade's militarization of police, the state will come to mainly interact with the people in the form of violent repression.

Within the enclaves of the rich, the comforts of modernity will be maintained. The extravagant homes of the wealthy will be protected by heavy surveillance and police forces, while the privileged enjoy high-tech conveniences within the "smart cities" that the U.S. national security state plans to create. As the residents of these fortified areas gain access to home delivery, an "internet of things," and self-driving cars, the lifestyles of the rest of us will increasingly fall into scarcity and disrepair.

Related Topic(s): Class; Climate Change; Military; Neoliberalism; Pentagon; State, Add Tags
Add to My Group(s)
Go To Commenting
The views expressed herein are the sole responsibility of the author and do not necessarily reflect those of this website or its editors.