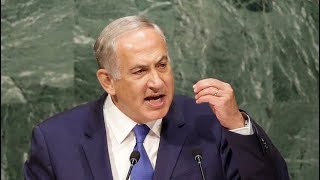 There is a great irony in the fact that Israel is seeking a seat at the United Nations Security Council (UNSC).

Since its establishment atop the ruins of Palestinian cities and villages in 1948, Israel has had the most precarious relationship with the world's largest international body.

It has desperately sought to be legitimized by the UN, while it has done its utmost to delegitimize the UN.

Following a resolution at the UN Human Rights Council (UNHRC) condemning Israel's human rights abuses in the Occupied Palestinian Territory in March 2014, Israeli Prime Minister, Benjamin Netanyahu, then accused the UN of being "absurd." He vowed to "continue to denounce and expose" the UN "procession of hypocrisy."

For many years, Israeli leaders and government officials have made it a habit of undermining the UN and its various bodies and, with unconditional support from Washington, habitually ignored numerous UN resolutions regarding the illegal occupation of Palestine.

To a certain extent, the Israeli strategy -- of using and abusing the UN -- has worked. With US vetoes, blocking every UN attempt at pressuring Israel to end its military occupation and human rights violations, Israel was in no rush to comply with international law.

But two major events have forced an Israeli rethink.

First, in December 2016, the US abstained from a UN resolution that condemned Israel's illegal settlement activities in the Occupied Palestinian Territories.

By breaking with a decades-long tradition of shielding Israel from any international censure, it appeared that even Washington's seemingly undying allegiance to Tel Aviv was uncertain.

Second, the rise of the Palestinian-led Boycott, Divestment and Sanctions (BDS) movement began changing the dynamics of international politics regarding the Israeli occupation.

The movement, which began as a call by Palestinian civil society to hold Israel accountable for its violations of Palestinian human rights, grew rapidly to become a global movement. Hundreds of local BDS groups multiplied around the world, joined by artists, academicians, union members and elected politicians.

Within a few years, BDS has registered as a serious tool of pressure used to denounce the Israeli occupation and demand justice for the Palestinian people.

UNHRC quickly joined in, declaring its intention to release a list, thus exposing the names of companies that must be boycotted for operating in illegal Israeli settlements.

The human rights group's efforts were coupled by repeated condemnations of Israel's human rights violations as recorded by the UN cultural agency, UNESCO.

Related Topic(s): Benjamin Netanyahu; Global Outreach; Israel; Israeli Pressure On US; Israeli-palestinian; Occupation; Un Security Council, Add Tags
Add to My Group(s)
Go To Commenting
The views expressed herein are the sole responsibility of the author and do not necessarily reflect those of this website or its editors.