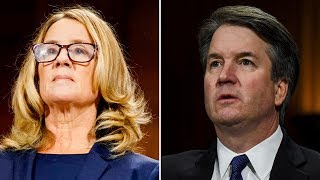 The allegations contained in the complaints [against Judge Kavanaugh] are serious, but the Judicial Council is obligated to adhere to the Act. Lacking statutory authority to do anything more, the complaints must be dismissed because an intervening event Justice Kavanaugh's confirmation to the Supreme Court has made the complaints no longer appropriate for consideration under the Act". Because it lacks jurisdiction to do so, the Council makes no findings on the merits of the complaints.

That is the sound that eight federal judges make when they know full well they're doing something rotten but can't bring themselves to defend the integrity of their own judicial system.

This order deals with complaints against federal judge Brett Kavanaugh, whose reputation for perjurious testimony is documented at least as far back as 2004. Last summer, the US Senate gave only cursory attention to whether Kavanaugh had repeatedly lied under oath on a variety of occasions, including the Senate judiciary committee hearings of 2018.

Kavanaugh was a federal district judge from May 30, 2006, until October 6, 2018, when he was sworn in as a Supreme Court justice. At that time, the majority of 83 ethical conduct complaints addressing his behavior as a district judge had already been filed. In an unusual procedure, the Tenth Circuit Judicial Council has made these 83 complaints public on its website, while concealing the identities of the complainants.

The first batch of Kavanaugh complaints went to the DC Circuit, which passed them to Supreme Court Chief Justice John Roberts, who passed them on to the Tenth Circuit on October 10. At that time I wrote in Reader Supported News that the credibility of the US judicial system was the core issue in the Kavanaugh case:

This is still true, as the Kavanaugh complaints appear headed back to the Chief Justice's lap for further action, or inaction.

It took the eight judges of the Tenth Circuit Judicial Council just over two months to decide to do nothing about any of the 83 misconduct complaints against Judge Kavanaugh. Worse, the court's order asserted in a strained legal argument that there was nothing that could be done legally about the 83 misconduct complaints against Judge Kavanaugh for one reason, and one reason only -- because he had become Justice Kavanaugh. That's the whole argument: that Kavanaugh gets to escape judicial accountability, and his getaway car is his seat on the Supreme Court. This is cultural madness and legal absurdity. What were those Tenth Circuit judges thinking?

What they actually do is create a legal fiction, starting with a false assertion in the first sentence: "Complaints of judicial misconduct have been filed against Supreme Court Justice Brett M. Kavanaugh..." In fact, most of the complaints were filed against Kavanaugh when he was a district judge. All the complaints cite judicial misconduct by Kavanaugh as a district judge. The false statement of reality is necessary to support the wonderland the judges need to escape dealing with what the court saw as the substance of the charges:

"... that Justice [sic] Kavanaugh made false statements during his nomination proceedings to the D.C. Circuit in 2004 and 2006 and to the Supreme Court in 2018; made inappropriate partisan statements that demonstrate bias and a lack of judicial temperament; and treated members of the Senate Judiciary Committee with disrespect."

Much of this is beyond reasonable dispute. Both professional and lay witnesses abound. More than 2,400 law professors are on record opposing Kavanaugh as unfit to serve on the Supreme Court. Even Kavanaugh has acknowledged and quasi-apologized for some of the behavior in the 83 complaints. The Tenth Circuit judges acknowledge that the complaints are "serious" but then choose to make "no findings on the merits of the complaints." How is this not deliberate judicial malpractice?

The answer to that is a legal quibble. According to the Tenth Circuit judges, the applicable statute for federal district judges is not applicable to Supreme Court justices. This is certainly true in the sense that if the complaints made against Kavanaugh referred to his behavior as a justice, the statute would not apply. The statute is the Judicial Conduct and Disability Act, 28 USC 351 et seq., which applies specifically to federal circuit judges, district judges, bankruptcy judges, and magistrate judges. It is one of the abiding scandals of American government that the Supreme Court is subject to no rules of ethics of its own and that Congress has done little to remedy the ridiculous result: that those with the most authority are held the least accountable. Or as the Tenth Circuit judges put it:

"... the complaints must be dismissed because, due to his elevation to the Supreme Court, Justice Kavanaugh is no longer a judge covered by the Act. See 28 USC 352(b)(1)(A)(i)." [emphasis added]

The court thereby creates a reality in which:

(1) Over a period of 13 years as a judge, Kavanaugh committed objectionable acts;

(2) Complaints were lawfully filed in response to his objectionable acts;

Vermonter living in Woodstock: elected to five terms (served 20 years) as side judge (sitting in Superior, Family, and Small Claims Courts); public radio producer, "The Panther Program" -- nationally distributed, three albums (at CD Baby), some (more...)
Related Topic(s): Accountability; Court Challenge; Kavanaugh Confirmation; Kavanaugh Lies; US Constitution; US Supreme Court, Add Tags
Add to My Group(s)
Go To Commenting
The views expressed herein are the sole responsibility of the author and do not necessarily reflect those of this website or its editors.