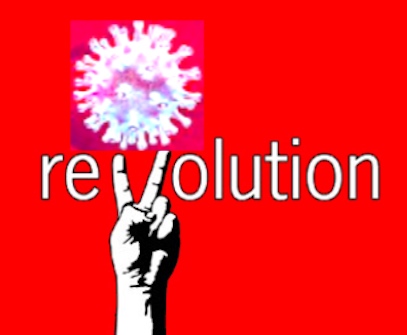 Copenhagen "A spectre is haunting Europethe spectre of" Covid-19. For Marx and Engels writing the Communist Manifesto, in 1848, that spectre was communism, their political system of choice. This flaring ghost they described frightened the capitalist class, which endeavored to exorcise its breath.

The contemporary specter (thesis-see note) is a new corona virus, code named COVID-19. The spectre of communism lurks for a rebirth as the capitalist class and its many political parties (albeit only the duopoly in the US), propped up by their propagandistic mass media, use this virus to exorcise even more of the working peoples' gains and rights. The ruling class is fully aware that uproars and uprisings might occur, and is instituting even more measures to prevent such eventualities.

The antithesis being used to confront thesis Covid-19 is a mixture of capitalism and socialism and is temporarily accepted by the capitalist class generally and its politicians as a necessary palliative to keep the masses from rising up.

The rulers' politicians are extending temporary health care and some economic assistance to more people in the United States, and throughout Europe. They are approving federal wage subsidies or what socialists would call "basic income" supports, free medical care to test and treat the disease, and the commandeering of private property like hotels and convention centers to act as temporary overflow hospitals. Since the costs of combating this disease are gigantic, and since it is absolutely necessary to keep distance from one another, in order to curb contagion, the usual wars for profit are at a standstill in most areas. This means fewer people are being murdered and tortured. Less military action, including fewer fossil fuel-driven war planes, tanks, and other motor vehicles (also fewer civilian vehicles in use around the world) means less pollution of mother earth. Such actions would be permanent in a socialist or communist system.

These measures result in most people satisfactorily experiencing a bit more peace, cleaner air and cleaner water. But that experience could lead to a greater awareness and to demands that the world must not return to "business as usual." A forthcoming socio-economic-political synthesis could be a popular demand to stop warring and stop using fossil fuel for greater profits for the finance speculators, weapons industry and the oil-gas industry. People might rise up like France's Yellow Vests, building toward mass actions with general strikes, leading to world-wide strikes and other gigantic actions.

The need for some socialistic or social democratic measures are being grudgingly conceded by the capitalists, albeit not with an open admission of what they are doing or why by capitalist governments.

Radicals, socialists, communists and progressives should openly publish their views, their aims, their solutions to this crisis, and meet this crises with a declaration of the need for an end to the global capitalism that has brought this disaster upon the people of the world"

For the rest of this article by RON RIDENOUR, retired journalist, occasional contributor to ThisCantBeHappening, anti-war and radical activist and author of "The Russian Peace Threat: Pentagon on Alert" (June 2018, Punto Press, NY), please go to: https://thiscantbehappening.net/marx-on-the-covid-19-pandemic/

Related Topic(s): Capitalism; Corona Virus Coronavirus Covid-19; Marx; Marxism; Socialism; Thiscantbehappening; Uprisings; Workers, Add Tags
Add to My Group(s)
Go To Commenting
The views expressed herein are the sole responsibility of the author and do not necessarily reflect those of this website or its editors.