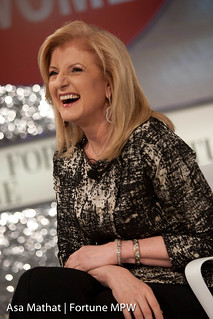 This month, Newsweek quietly reported that a German media conglomerate called Axel Springer was the "most serious" contender to buy the Huffington Post in the proposed sale of the magazine's corporate parent, AOL, to Verizon. While Newsweek detailed Springer's sizable media holdings in Germany and beyond, from the tabloid Bild to the newspaper Die Welt, it failed to note the stringently enforced right-wing editorial line that makes Springer the German equivalent of Rupert Murdoch's News Corp.

Among the five preambles of Springer's corporate principles is the requirement that employees "support the vital rights of the State of Israel." Journalists are also expected to "uphold the principles of a free social market economy" and "support the Transatlantic Alliance and maintain solidarity with the United States of America in the common values of free nations." The webpage outlining Springer's preambles mysteriously disappeared from the web months before the company entered the bidding for the Huffington Post. (An archived version of the page can be viewed here).

The Huffington Post is one of America's most widely read online news outlets. While the site's various niche portals earn much of their traffic through clickbait headlines and celebrity news, the Huffington Post's politics section has made its mark with slashing coverage of the Trans Pacific Partnership (TPP) trade deal, Likudnik mega-donors and police brutality.

Huffington Post reporters have targeted Democratic senators who promoted war on Iran and highlighted President Barack Obama's support for a provision in TPP that would reward companies that profit from slavery. Earlier this year, Obama urged House Democrats not to read the Huffington Post, complaining that the outlet reported unfairly on the free trade agenda he has been promoting. (Full disclosure: my brother Paul is a staff writer for The Huffingon Post.)

Springer's editorial line offers a stark contrast to the Huffington Post. Founded in 1946 by the journalist Axel Springer, the company now holds about $3 billion in assets and oversees a collection of publications mostly associated with what left-wing Germans derisively refer to as "the boulevard press." Springer took a turn to the populist right in the late 1960's when Axel Springer sicced his most popular tabloid, Bild, against the radical left-wing student movement in West Germany. The paper homed in on Rudi Dutschke, one of the movement's most visible leaders, accusing him of conspiring to bring down West Germany through violent revolution while calling on patriotic Germans to "eliminate the trouble makers."

Related Topic(s): Conglomerates; Huffington Post; Media; Politics, Add Tags
Add to My Group(s)
Go To Commenting
The views expressed herein are the sole responsibility of the author and do not necessarily reflect those of this website or its editors.