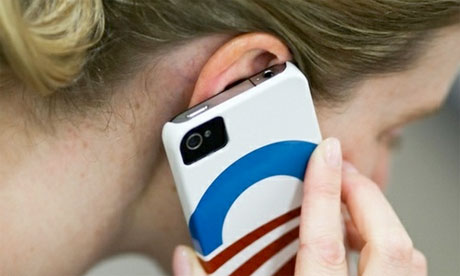 The rightwing transparency group, Judicial Watch, released Tuesday a new batch of documents showing how eagerly the Obama administration shoveled information to Hollywood film-makers about the Bin Laden raid. Obama officials did so to enable the production of a politically beneficial pre-election film about that "heroic" killing, even as administration lawyers insisted to federal courts and media outlets that no disclosure was permissible because the raid was classified.

Thanks to prior disclosures from Judicial Watch of documents it obtained under the Freedom of Information Act, this is old news. That's what the Obama administration chronically does: it manipulates secrecy powers to prevent accountability in a court of law, while leaking at will about the same programs in order to glorify the president.

But what is news in this disclosure are the newly released emails between Mark Mazzetti, the New York Times' national security and intelligence reporter, and CIA spokeswoman Marie Harf. The CIA had evidently heard that Maureen Dowd was planning to write a column on the CIA's role in pumping the film-makers with information about the Bin Laden raid in order to boost Obama's re-election chances, and was apparently worried about how Dowd's column would reflect on them. On 5 August 2011 (a Friday night), Harf wrote an email to Mazzetti with the subject line: "Any word??"  suggesting, obviously, that she and Mazzetti had already discussed Dowd's impending column and she was expecting an update from the NYT reporter.

A mere two minutes after the CIA spokeswoman sent this Friday night inquiry, Mazzetti responded. He promised her that he was "going to see a version before it gets filed," and assured her that there was likely nothing to worry about:

"My sense is there a very brief mention at bottom of column about CIA ceremony, but that [screenwriter Mark] Boal also got high level access at Pentagon."

She then replied with this instruction to Mazzetti: "keep me posted," adding that she "really appreciate[d] it."

Moments later, Mazzetti forwarded the draft of Dowd's unpublished column to the CIA spokeswoman (it was published the following night online by the Times, and two days later in the print edition). At the top of that email, Mazzetti wrote: "this didn't come from me ... and please delete after you read." He then proudly told her that his assurances turned out to be true:

"See, nothing to worry about."

This exchange, by itself, is remarkably revealing: of the standard role played by establishment journalists and the corruption that pervades it. Here we have a New York Times reporter who covers the CIA colluding with its spokesperson to plan for the fallout from the reporting by his own newspaper ("nothing to worry about"). Beyond this, that a New York Times journalist -- ostensibly devoted to bringing transparency to government institutions -- is pleading with the CIA spokesperson, of all people, to conceal his actions and to delete the evidence of collusion is so richly symbolic.

The relationship between the New York Times and the US government is, as usual, anything but adversarial. Indeed, these emails read like the interactions between a PR representative and his client as they plan in anticipation of a possible crisis.

Even more amazing is the reaction of the newspaper's managing editor, Dean Baquet, to these revelations, as reported by Politico's Dylan Byers:

"New York Times Managing Editor Dean Baquet called POLITICO to explain the situation, but provided little clarity, saying he could not go into detail on the issue because it was an intelligence matter.

"'The optics aren't what they look like,' he went on. 'I've talked to Mark, I know the circumstance, and given what I know, it's much ado about nothing.'"

Related Topic(s): Collusion; Federal Agency CIA; Newspapers, Add Tags
Add to My Group(s)
Go To Commenting
The views expressed herein are the sole responsibility of the author and do not necessarily reflect those of this website or its editors.