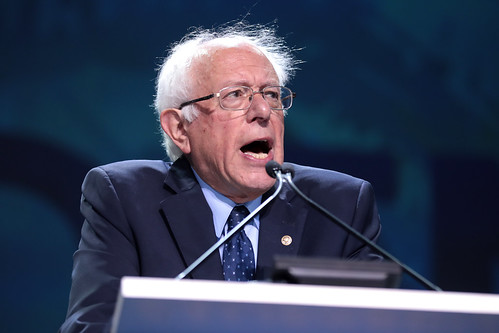 For the United States, oligarchy is the elephant and donkey in the room. Only one candidate for president is willing to name it.

Out of nearly 25,000 words spoken during the Democratic debate last Thursday night, the word "oligarchy" was heard once. "We are living in a nation increasingly becoming an oligarchy," Bernie Sanders said, "where you have a handful of billionaires who spend hundreds of millions of dollars buying elections and politicians."

Sanders gets so much flak from corporate media because his campaign is upsetting the dominant apple cart. He relentlessly exposes a basic contradiction: A society ruled by an oligarchy defined as "a government in which a small group exercises control especially for corrupt and selfish purposes" can't really be a democracy.

The super-wealthy individuals and huge corporations that own the biggest U.S. media outlets don't want actual democracy. It would curb their profits and their power.

Over the weekend, The Washington Post editorialized that the agendas of Sanders and Elizabeth Warren "probably would fail at the polls and, if not, would carry extreme risks if they tried to implement them." The editorial went on to praise "the relative moderates in the race -- Joe Biden, Pete Buttigieg and Amy Klobuchar for "offering a more positive future."

But "a more positive future" for whom? Those "moderates" are certainly offering a more positive future for the newspaper's owner, Jeff Bezos, who usually ranks as the richest person in the world. He wants to acquire even more extreme personal wealth beyond his current $108 billion.

The Washington Post's routinely negative treatment of Sanders, which became notorious during his 2016 presidential run, remains symptomatic of what afflicts mass-media coverage of his current campaign from editorial pages and front pages to commercial TV news and "public" outlets like the "PBS NewsHour" and NPR's "All Things Considered" and "Morning Edition."

The essence of a propaganda system is repetition. To be effective, it doesn't require complete uniformity only dominant messaging, worldviews and assumptions.

Prevailing in news media's political content is the central, tacit assumption that oligarchy isn't a reality in the United States. So, there's scant interest in the fact that the richest three people in the USA "now have as much wealth as the bottom half of the U.S. population combined." As for the damaging impacts on democracy, they get less attention than Melania Trump's wardrobe.

Now, as Sanders surges in Iowa and elsewhere, there's a renewed pattern of mass-media outlets notably ignoring or denigrating his campaign's progress. Like many other Sanders supporters, I find that disgusting yet not surprising.

In fortresses of high finance and vast opulence with no ceiling on the often-pathological quests for ever-greater wealth defenders of oligarchy see democratic potential as an ominous weapon in the hands of advancing hordes. Media outlets provide a wide (and shallow) moat.

For mass media owned by oligarchs and their corporate entities, affinity with the "moderate" orientations of Biden, Buttigieg and Klobuchar is clear. Any one of them would be welcomed by corporate elites as protection against what they see as a hazardous upsurge of progressive populism.

While Buttigieg has emerged as a sharp corporate tool for the maintenance of oligarchy, Joe Biden is an old hand at such tasks. Meanwhile, ready to preempt the politician-intermediaries for plutocracy, Michael Bloomberg is offering a blunt instrument for direct wealthy rule. Estimated to be the eighth-richest person in the United States, he was urged to run for president this year by Bezos.

During the next few months, Bloomberg will continue to use his massive class-war chest to fund an advertising onslaught of unprecedented size. In just weeks, he has spent upwards of $80 million on TV ads, dwarfing all such spending by his opponents combined. And, with little fanfare, he has already hired upwards of 200 paid staffers, who'll be deployed in 21 states.

Related Topic(s): Bernie Sanders 2020; Corporate Cash; Corporate Media; Media Blind Spots Bernie Sanders; Oligarchy; Propaganda, Add Tags
Add to My Group(s)
Go To Commenting
The views expressed herein are the sole responsibility of the author and do not necessarily reflect those of this website or its editors.