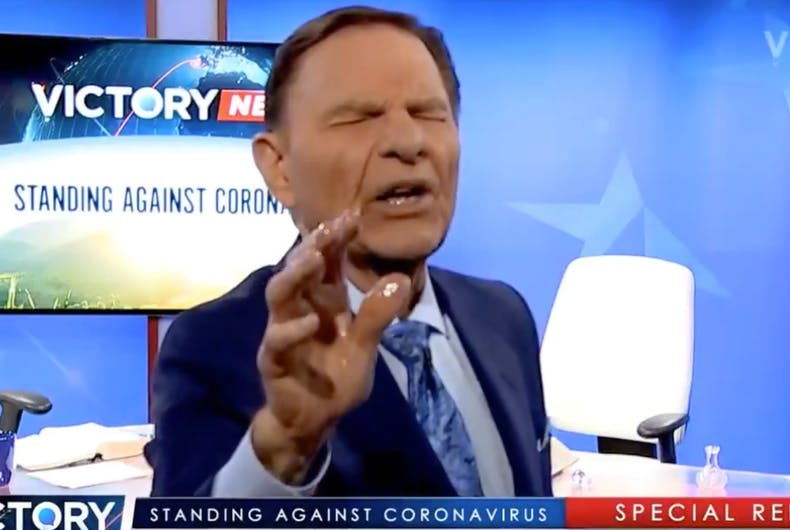 The coronavirus pandemic, which we are all currently in, helps to make painfully clear that Christianity's claim that Christians can heal people is a false claim. This claim made by Christianity is based on multiple false claims made in the Christian Bible. One of the more popular claims is found at Mark 16:18 which states, after promising that believers are divinely protected from deadly snakes and deadly poisons, "they shall lay hands on the sick, and they shall recover."

Another Bible teaching that gives Christians literally super powers, including the powers to heal and to bring dead people back to life, is found in the anonymously written Gospel of John (all of the authors of the four Gospels are anonymous, making Christianity unrecoverably based on mere hearsay of an unknown origin). John 14:12-14 has Jesus saying:

Verily, verily, I say unto you, He that believeth on me, the works that I do shall he do also; and greater works than these shall he do; because I go unto my Father. And whatsoever ye shall ask in my name, that will I do, that the Father may be glorified in the Son. If ye shall ask any thing in my name, I will do it.

Based on this promise allegedly made by Jesus himself, once Jesus is back with his father up in heaven (which, based on Christianity itself, happened on the day Jesus died (Luke 23:42-43), or, if you go by Luke 24:51 it was the day Jesus came back to life. Mark 16:19 also claims he went up to heaven on the same day he came back to life. However, if you go by John 20:17, Jesus was still on Earth days after he came back to life, though the exact time of lift-off for Jesus is not mentioned in John. Acts 1:9 has Jesus being "taken up in a cloud" to heaven 40 days after he came back to life), Christians will have their super powers. Regardless of which ascension Bible story Christians chose to believe in, the fact remains that based on their own Christian myth, Jesus has departed for heaven. This means, according to the Jesus promise at John 14:12-14, Christians today can, at a minimum, do all the things Jesus allegedly did, like walking on water, turning water into wine, healing the sick and raising the dead. Add to this, the promise that Christians will be able to get any thing they ask for when they pray in Jesus' name, there is absolutely no excuse why at least one Christian, out of the over TWO BILLION Christians now on Earth, does not end the coronavirus and heal the people who are now infected with it and bring back to life all the people who have died from it. The only reason they cannot do this is because they've been taken in by false advertising found in the Bible and promoted by Christianity.

A legal claim can be made for false advertising if the plaintiff can show these five elements:

(1) defendant made false or misleading statements as to his own products (or another's); (2) actual deception, or at least a tendency to deceive a substantial portion of the intended audience; (3) deception is material in that it is likely to influence purchasing decisions; (4) the advertised goods travel in interstate commerce; and (5) a likelihood of injury to plaintiff. However, the plaintiff does not have to prove actual injury.

Regarding the first element, the Bible itself can be used to show the false or misleading statements promising healing through prayer.

Regarding the second element, billions of people on Earth are deceived by these false advertising claims of faith healing.

Regarding the third element, the Christian deception of faith healing causes billions of people to financially support Christianity and to purchase items related to Christianity.

Regarding the fourth element, Christian goods for sale definitely travel in interstate commerce and in world commerce.

Regarding the fifth element, not only is there a likelihood of injury to people, the false advertising of faith healing has already caused injury to, and the deaths of, children. In addition to this, the false advertising of faith healing is putting countless people at risk of infection by the coronavirus due to Christians who refuse to follow science-based guidelines of social distancing in order to continue their church services and religious gatherings.

A good question to sincerely ask Christians is if they are cruel, or simply wrong. For if they truly believe the Bible is the Word of God and believe the Bible's false promises of faith healing, yet, they are not healing people of the coronavirus, they must be cruel. However, if the Bible's promises of faith healing are false advertising, then they are simply wrong. (Here is a link to a PDF Deism leaflet about this.) The more Deists and other freethinkers do to bring these facts to the attention of sincere Christians, the more we help move them and the world away from the devastating harm of the "revealed" religions, and on to a life and world free of the harmful superstitions/"revealed" religions, and grounded in true appreciation for, and use of, our gift from The Supreme Intelligence/God of innate reason!

Bob Johnson is a paralegal and a freelance writer in Florida. He was raised Roman Catholic, but after reading Thomas Paine's The Age of Reason, he became a Deist. In 1993 he founded the World Union of Deists and in 1996 he launched the first web (more...)
Related Topic(s): Bible; Children; Christianity; Deism; Faith; Freethinker; God; Healing; Jesus; People; (more...) People; Power, Add Tags  (less...)
Add to My Group(s)
Go To Commenting
The views expressed herein are the sole responsibility of the author and do not necessarily reflect those of this website or its editors.