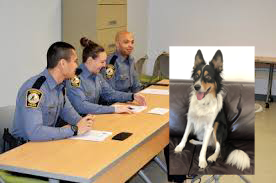 (Image by Fred g)   Details   DMCA
I have been writing about Hunter, the Border Collie I got seven weeks ago from Border Collies in Need.

Hunter finds things, according to me, telepathically. The night I brought him home and parked three houses away, he found my house.

A week later I took him to Hidden Hills where my cousin lives and parked over a mile away from the house and he found it too.

Hunter woke up today and wanted to know if anyone was asking about him finding locations using telepathy. I transcribed our conversation below:

Hunter (H): Hey Fred haven't you been telling your friends about me finding where you worked and lived in the 70's. [1]

Fred (F): Yes, I was sure everyone on my email list would be interested, fascinated and want to hear more.

H: Well what are they saying?

F: If you really found my cousin's house then you are just another Clever Hans: you were watching me and responding to involuntary cues in my body language.

H: Huh? I don't think they watched the video because even a child can see that when I am on leash, I am dragging you, and off leash running to the house. Heck, I was off leash when I ran up the driveway into the garage to the door that everyone uses to go to their house. Didn't you send it to animal psychics, communicators, Beatrice Lydecker, and Pilley Bianchi (Chaser)?

H: What did they say?

F: Nothing, but I did get an email that I am a smart guy, but Telepathy is off the table.

You are a very smart guy, truly I remember you back in the day as a smart dude.There is no such thing as telepathy, in animals or humans. Now animals have senses beyond humans, there are no human drug sniffers at the airport. But still this is not animal telepathy.

F: A lot of people are suffering from a severe case of cognitive dissonance.

Related Topic(s): Telepathy, Add Tags
Add to My Group(s)
Go To Commenting
The views expressed herein are the sole responsibility of the author and do not necessarily reflect those of this website or its editors.