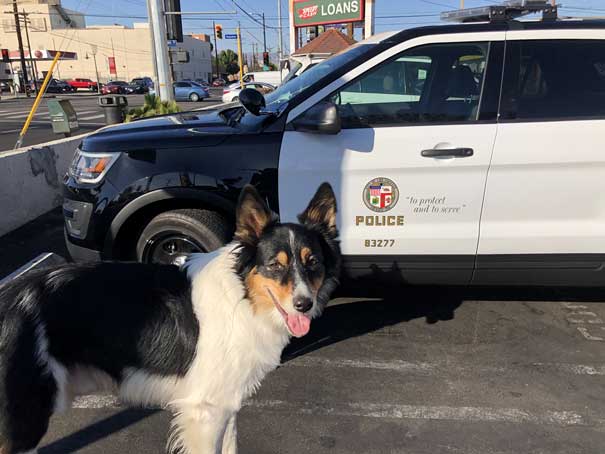 I have been writing about Hunter, the Border Collie I got twelve weeks ago from Border Collies in Need. Hunter finds things, according to me, with one or all of the 3 Tele's:

1. Telepathy is the ability to transmit words, emotions, or images to someone else's mind.

2. Telekinesis is the ability to move objects through mind power.

3. Teleportation refers to transporting yourself or your mind to a location miles away from you in fraction of seconds.

The night I brought him home and parked three houses away, he found my house. Thirteen days later I took him to Hidden Hills where my cousin lives and parked over a mile away. I don't walk, hike or do anything on foot in Hidden Hills. If you have a lot time on your hands then you can watch the whole 9 minutes. [1]

I made a 5-minute version where you can watch him find the house and run up the driveway into the garage to the back door. Why is that important?

He is off leash and everyone who visits enters the house through the garage. The thumbnail on the YouTube is the map of the route he took to get to their house.

Either video will convince you that he isn't "finding" by scent, nor am I giving him non-verbal clues.

We can also eliminate that his success at "finding" is not "an inevitable consequence of my mind searching for causal structure in reality, so that I can learn and adapt to my environment." [2]

I never believed that Hunter was the only dog that could find locations using one or all of the 3 Tele's; after all there are 15 Pets Who Returned Home From Remarkable Distances and the Cat that walked 2,000 miles across Australia to get home after the owners relocated.

Hunter didn't just find his way home, he found where I worked in 1972, the Building Department in Van Nuys and the house that I built and then sold to Billy Griffin from the Miracles in 1975. Read about Hunter at OpEdNews. [3]

Researchers have documented that wolves and wild dogs have the ability to invent completely new routes [eliminating any explanation using scent] from point to point, once they are familiar with the terrain.

Hunter wasn't finding his way home because he was familiar with the "terrain," he was going to the locations stored in my brain.

Related Topic(s): Animals, Add Tags
Add to My Group(s)
Go To Commenting
The views expressed herein are the sole responsibility of the author and do not necessarily reflect those of this website or its editors.