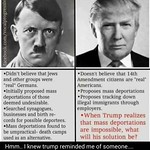 Fortunately, I am not a professional journalist assigned to follow the Republican convention. Unavoidably, I watched only short clips on regular news programs and may have slept through some segments about the convention.

The one shocker that did jar me awake - on Day 1 or Day 2? - was when people chanted "four more years" and Trump responded "twelve more years!" Did I dream this or did it actually happen? No one has commented on it, to my knowledge. It must have been a nightmare. If not, that would the most momentous moment of the convention. Knowing Trump as we do now, this cannot be shrugged off as just another meaningless utterance or joke; he takes himself seriously. It would portend a serious intent to undo the constitution.

If this actually happened, then all the alarms should be sounded. Trump's pathological fantasy could further our real world agony. This is not merely a party matter. Trump should be seriously challenged on his sanity. The Republican Party should be challenged to withdraw his nomination as a threat to national security. The party itself, to put up such a dangerous, libertarian counterfeit candidate, reveals itself to be nothing more than a sham conservative party backed by corporate wealth, appealing to mob mentality. It has nothing in common with the party of Lincoln.

Related Topic(s): Nomination; Security, Add Tags
Add to My Group(s)
Go To Commenting
The views expressed herein are the sole responsibility of the author and do not necessarily reflect those of this website or its editors.