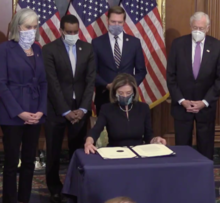 On April 14, the US Centers for Disease Control issued new guidance for Americans who've grabbed their jabs. It's safe, CDC says, for those fully vaccinated against COVID-19 to "resume activities without wearing a mask or physically distancing."

Outdoors. Indoors. Whether everyone present is vaccinated or not. Vaccinated? You're good to go.

That, presumably, is the science part. The political part is "except where required by federal, state, local, tribal, or territorial laws, rules, and regulations, including local business and workplace guidance."

Oh, and in the US House of Representatives.

House Speaker Nancy Pelosi (D-CA), in her infinite wisdom, hath decreed (through Rear Admiral Brian P. Monahan, US Navy, Attending Physician of the United States Congress and the United States Supreme Court ) that the mask mandate will continue in force on the House floor "until all Members and floor staff are fully vaccinated."

Last September, Pelosi issued a press release announcing that "we need science, not politics. ... The American people need to hear directly from the scientists about how the virus spreads and what precautions are necessary."

Last October, Pelosi insisted in another press release that "it has always been imperative that we follow the science."

Last November, Pelosi told NPR's Ari Shapiro that "the [Trump] Administration has refused to follow the science. They have contempt for science ..."

But now that "the science" isn't saying what she wants it to say, as it's been energetically massaged to do for more than a year now, she's got a sudden case of said contempt herself. What's up with that?

"It's about control," says House Minority Whip Steve Scalise (R-LA). "She wants to control the House" (as if he doesn't).

Scalise is right, but he's not thinking big enough. Pelosi doesn't just want to control the House. She wants to, along with her party, run the country (and for that matter the world).

Opportunity for her fellow Democrats in state governments to seize previously unthinkable powers in the name of "public health," no matter how specious the justifications.

Opportunity to rule without limits.

Related Topic(s): Covid-19; Nancy Pelosi; Science, Add Tags
Add to My Group(s)
Go To Commenting
The views expressed herein are the sole responsibility of the author and do not necessarily reflect those of this website or its editors.