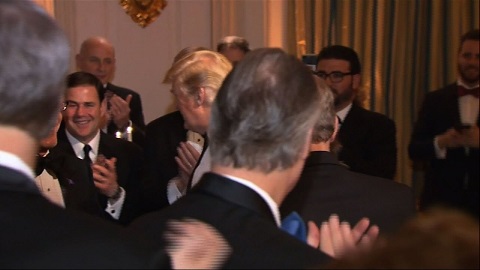 Not since the civil rights movement of the 1950s and 60s have tensions been so high between a U.S. administration and the states of the federal republic. During the civil rights era, it was the federal government that was playing the role of protector of the U.S. Constitution in pressuring segregationist states like Arkansas, Mississippi, and Alabama to comply with federal civil rights law. Today, the shoe is on the other foot. A racist and xenophobic U.S. administration has actually commenced imposing travel and other sanctions on states like New York and California, merely because they are upholding U.S. and international human rights law, particularly that dealing with asylum for foreign refugees.

A major rift has opened up between the Trump White House and the Governor of New York, Andrew Cuomo, over Trump's decision to prohibit residents of New York from participating in Trusted Traveler Programs, including Global Entry, Free and Secure Trade for Commercial Vehicles (FAST), NEXUS, and SENTRI, which speed Americans through immigration controls at airports and land borders with Canada and Mexico. At issue is New York's Green Light Law and more than a dozen other states' policies that permit undocumented immigrants to obtain driver's licenses. Acting deputy secretary of Homeland Security Ken Cuccinelli, a racist and xenophobe Republican Party hack from Virginia, banned New York and other states from participation in Global Entry because the states barred U.S. immigration officials of accessing state motor vehicle databases to determine the identities of undocumented immigrants.

Banning New Yorkers from participation in Global Entry will have a drastic effect on New York truck drivers who regularly cross the U.S.-Canadian border. A leaked Department of Homeland Security memo stated that the Trump administration is intent on "punishing" states that refuse federal access to their driver's databases and offer "sanctuary" to undocumented immigrants fearful of arrest and detention by federal law enforcement authorities.