Recently, U.S. president Barack Obama announced that Washington would launch surgical strikes against the Bashar Assad regime in Syria as a punitive measure in the wake of a chemical weapons attack the Syrian government waged against rebel forces. The President's announcement was followed by a massive mobilization of U.S. Navy warships heading toward the Eastern Mediterranean Sea. 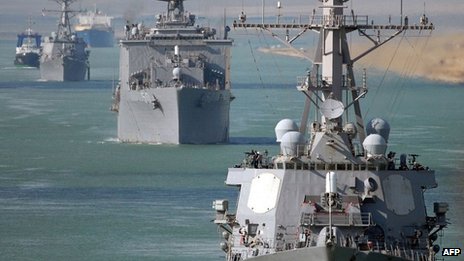 Copyrighted Image? DMCA
by google
The warship deployment seems to indicate that U.S. decision-makers have given final shape to plans for a punitive military action against the Assad government, an opinion shared by Andrel Akuluv of the Strategic Culture Foundation in a news report published August 29. [i]


Arguably, however, the U.S. action will beget grave consequences for both the region and the U.S. itself. They can be projected to include the following:

First, the region may well be thrown into a condition of unending chaos. The Syrian Alawites, an anti-Sunni religious/paramilitary group (also known as Alawis), are allied with and heavily equipped by government forces, and also supported by the Hezbollah of Lebanon. The Alawites would consider any military action by the U.S. as a plot by the Sunni opposition to pave the way for a violent overthrow of the Assad regime. They could therefore be counted on to fight to the end alongside Assad's loyal military forces to defend the regime against any takeover by rebel Sunnis.

Any full-fledged civil war in Syria would lead inexorably to a total loss of order in the country. With mounting casualties, the nascent revolutionary opposition would be supported by the West and some Arab countries, while the Alawites would be backed by Iran and Russia. Moreover, given such external intervention, what started as a sectarian civil war would no longer remain confined within Syrian boundaries. Instead, the war could well inspire sectarian conflict in neighboring countries, such as Turkey, Bahrain, Qatar, and even Saudi Arabia, where Shiites constitute a significant portion of the national population.

For the U.S. military, any involvement in Syria resulting from initial "surgical" strikes to degrade Assad's ability to use chemical weapons would again subject it to the hazards of asymmetric warfare. That would invite another quagmire of the kind the U.S. faced in Afghanistan and Iraq, and again depress the morale of both the nation and its armed forces. It would also damage the U.S. economy, further deepening the recession and bringing additional misery to ordinary Americans.

A further danger of American surgical strikes on Syria is that they would follow a unilateral U.S. decision--a condition the Russians are reluctant to accept. Russian president Vladimir Putin has warned that Moscow would attack Saudi Arabia, the core ally of the U.S. in the region, if the West attacks Syria. [ii] Ominously, Russia has sent its warships to the Mediterranean Sea in order to assure the Syrian government of its military support in case it is attacked.

Copyrighted Image? DMCA
by KyivPost
This development indicates how hot the confrontation between the two world powers is relative to Syria. If America proceeds with the strikes it is planning, it is reasonable to assume that the destructive and hazardous war now raging in Syria will escalate. In fact, it is almost certain that other players in the region, pursuing their own self-interested agendas, will find it impossible not to take sides in the Syrian war. They will have to plunge in. Consequently, a World War III scenario, and the use of nuclear weapons, cannot be ruled out. And neither can the destruction of the planet.


If the U.S. does undertake action against Damascus before receiving a U.N. endorsement to do so, it will lose its credibility as a champion of human rights around the world. It will be considered, instead, the world's chief war monger.

There are two compelling reasons for such a shift in opinion:

1) Barack Obama specifically stated that the U.S. does not need to wait for a U.N. endorsement, as the country is free to do whatever it believes it needs to do to protect its interests. This is not rational.

2) Many believe that the alleged use of chemical weapons by the Syrian government has not yet been proven. Julian Lindley-French of the Atlantic Council recently argued that U.S. military strikes on Syria are not legal without U.N. endorsement, as it has still not been proved that Damascus actually used chemical weapons against its adversaries. [iii] Without U.N. international support, the U.S. will lose a legal underpinning for its actions against Syria, and the world will become more suspicious in general of its policies toward other nations.

Finally, it should not be forgotten that a wider war in Syria will bring still more misery to the Syrian people in terms both of causalities and property loss, and, also, without question, have adverse effects on regional security. There is only one course that can avoid these calamities: Washington must behave responsibly, and Damascus too must act in accordance with U.N. norms, foreclosing the horrors of war by seeking third-party mediation.

[iii] Julian Lindley-French, Syria; A Shot in the Dark, the Atlantic Council, August 27, 2013, available at http://www.acus.org/blogs/new-atlanticist/syria-a-shot-in-the-dark, accessed on September 2, 2013.

Related Topic(s): Syrian Situation, Add Tags
Add to My Group(s)
Go To Commenting
The views expressed herein are the sole responsibility of the author and do not necessarily reflect those of this website or its editors.