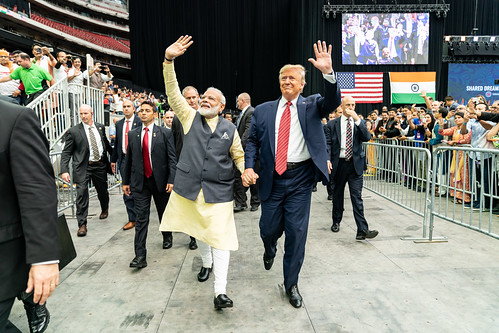 Trump and Modi!
(Image by The White House)   Details   DMCA

Commenting on recent anti-Muslim riots in Delhi, the US Congresswoman from New York said in a tweet: "President Trump is engaging in arms deals with Modi while his administration is ethnically cleansing the country's religious minorities. We must not enable this rise in sectarian violence." Cortez shared a report by The Guardian that called the Delhi anti-Muslim riot a "Hindu nationalist rampage".

Cortez's comments come days after Democratic presidential candidate and senator Bernie Sanders's reaction to the rioting in northeast Delhi. Sanders too had criticized Trump for his show of great friendship with Narendra Modi at a time when Delhi was burning:

"Over 200 million Muslims call India home. Widespread anti-Muslim mob violence has killed at least 27 and injured many more. Trump responds by saying, "That's up to India." This is a failure of leadership on human rights,", Sanders had Tweeted.

The death toll now stands at around 70 including 43 deaths in Delhi riots. Among the 1.9 million undocumented migrants who could not make it to the National Register of Citizens (NRC) list in Assam, nearly half were Muslims, according to a report by the United Against Hate group. Now, India's 200 million Muslims fear the process will be implemented across the country by the Hindu nationalist Bharatiya Janata Party (BJP) to marginalize the community.

The passing of the contentious Citizenship Amendment Act (CAA) in December last has aggravated such fears, leading to huge protests across the country. Modi's right-wing government is building concentrations camps throughout India. Al Jazeera reported recently, India's largest detention centre almost ready Spread around nearly 300,000 square feet (28,000 square meters or 2.8 hectares) of land, the detention centre in Goalpara's Matia village, 126km (78 miles) from state capital Dispur, can house 3,000 people. The centre is situated in a remote area of Goalpara with open land on its three sides and a road linking it to the main city of Guwahati in the front. Besides a hospital, the centre will have a dining area, school, recreational centre, and two separate lodging facilities designated for male and female inmates. "Male and female inmates will be kept in separate areas divided by a six feet red-coloured wall. There will be 13 male blocks of four storeys each and two female blocks of the same size,"

Rabindra Das, an engineer with Assam's police housing board and in-charge of the construction of the detention facility, told Al Jazeera. As a security measure, the detention centre has six watchtowers for round-the-clock monitoring, supported by a 100-metre high-beam light. According to officials at the construction site, the centre was sanctioned by India's federal home ministry in June last year and was supposed to be completed by December. However, the deadline has now been pushed to April this year. "It is a central government project. We have to finish the entire construction by April," said Das.

While the government has not yet announced a nationwide NRC, a number of detention centers are coming up across the country. In Assam, which has witnessed a movement against mainly Bangla-speaking migrants for more than four decades, at least six detention centres are already operational. On December 3, India's Minister of State for Home Affairs, G Kishan Reddy, in a written response, informed the Parliament that an existing detention centre in Goalpara has 201 inmates, Kokrajhar has 140, Silchar 71, Dibrugarh 40, Jorhat 196, and Tezpur centre holds 322 inmates. There have been nearly 100 deaths in these centers since 2008, including suicides by the inmates.

In July, another Minister of State for Home Affairs, Nityanand Rai, said all the states have been asked to establish detention centres according to a Model Detention Centre Manual prepared by the government. On December 22, the southern state of Karnataka opened a centre for undocumented migrants in Nelamangala, some 40km (27 miles) from the capital city of Bengaluru. The western state of Goa inaugurated its first detention centre on May 29 last year, while Rajasthan has a centre located inside a federal jail. Reports said a detention centre in the state of Punjab is expected to be completed by May this year. In the western state of Maharashtra, the previous BJP government identified a piece of land on the outskirts of the financial hub of Mumbai to build a detention centre.

However, current Chief Minister Uddhav Thackeray, who leads a coalition government with the main opposition Congress and other parties, recently assured the state's Muslims to not worry, indicating that his government may not follow the centre's order on establishing a detention centre. "Millions in India Could End Up in Modi's New Detention Camps", Bloomberg news reported on February 25.

Citizenship is a key part of that effort. Home Minister Amit Shah - Modi's right-hand man - described undocumented migrants from neighboring Muslim-majority Bangladesh as "termites" during a campaign rally in 2019. Proving citizenship in India isn't easy. People must show a chain of ancestry going back several generations with documents including refugee registration certificates, birth certificates, land and tenancy records, and court papers. In India's citizenship drive, women are more vulnerable to exclusion. Many are illiterate and don't have documents in their name to establish blood ties with their families. It costs money and time to track down the documents, and gender discrimination is commonplace: Men often get identity papers, while many women do not.