Source: The Guardian
I've learned far more about government spying on citizens from the media than I have from official intelligence briefings 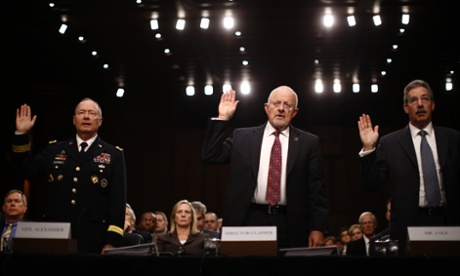 In the 1970s, Congressman Otis Pike of New York chaired a special congressional committee to investigate abuses by the American so-called "intelligence community" -- the spies. After the investigation, Pike commented:

"It took this investigation to convince me that I had always been told lies, to make me realize that I was tired of being told lies."

I'm tired of the spies telling lies, too.

Pike's investigation initiated one of the first congressional oversight debates for the vast and hidden collective of espionage agencies, including the Central Intelligence Agency (CIA), the Federal Bureau of Investigation (FBI), and the National Security Agency (NSA). Before the Pike Commission, Congress was kept in the dark about them -- a tactic designed to thwart congressional deterrence of the sometimes illegal and often shocking activities carried out by the "intelligence community." Today, we are seeing a repeat of this professional voyeurism by our nation's spies, on an unprecedented and pervasive scale.

Though the amendment barely failed, the vote signaled a clear message to the NSA: we do not trust you. The vote also conveyed another, more subtle message: members of Congress do not trust that the House Intelligence Committee is providing the necessary oversight. On the contrary, "oversight" has become "overlook."

Despite being a member of Congress possessing security clearance, I've learned far more about government spying on me and my fellow citizens from reading media reports than I have from "intelligence" briefings. If the vote on the Amash-Conyers amendment is any indication, my colleagues feel the same way. In fact, one long-serving conservative Republican told me that he doesn't attend such briefings anymore, because, "they always lie."

Recently, a member of the House Intelligence Committee was asked at a town hall meeting, by his constituents, why my requests for more information about these programs were being denied. This member argued that I don't have the necessary level of clearance  to obtain access for classified information. That doesn't make any sense; every member is given the same level of clearance.

There is no legal justification for imparting secret knowledge about the NSA's domestic surveillance activities only to the 20 members of the House Intelligence Committee. Moreover, how can the remaining 415 of us do our job properly, when we're kept in the dark -- or worse -- misinformed?

Edward Snowden's revelations demonstrate that the members of Congress, who are asked to authorize these programs, are not privy to the same information provided to junior analysts at the NSA, and even private contractors who sell services to foreign governments. The only time that these intelligence committees disclose classified information to us, your elected representatives, is when it serves the purposes of the "intelligence community."

As the country continues to debate the supposed benefits of wall-to-wall spying programs on each and every American, without probable cause, the spies, "intelligence community" and Congressional Intelligence Committees have a choice: will they begin sharing comprehensive information about these activities, so that elected public officials have the opportunity to make informed decisions about whether such universal snooping is necessary, or constitutional?

Or will they continue to obstruct our efforts to understand these programs, and force us to rely on information provided by whistleblowers who undertake substantial risks to disseminate this information about violations of our freedom in an increasingly hostile environment? And why do Generals Alexander and Clapper remain in office, when all the evidence points to them committing the felony of lying to Congress and the American people?

Representative Pike would probably say that rank-and-file representatives will never get the information we need from the House Intelligence Committee, because the spying industrial complex answers only to itself. After all, Pike, and many of the members of his special congressional committee, voted against forming it. As it is now constituted, the House Intelligence Committee will never decry, deny, or defy any spy. They see eye-to-eye, so they turn a blind eye. Which means that if we rely on them, we can kiss our liberty good-bye.

Democratic Congressman from Florida's 8th congressional district.
Related Topic(s): Amash-conyers; Congress; Congress Oversight Failures; Congressional Ethics; Edward Snowden; NSA; Surveillance, Add Tags
Add to My Group(s)
Go To Commenting
The views expressed herein are the sole responsibility of the author and do not necessarily reflect those of this website or its editors.