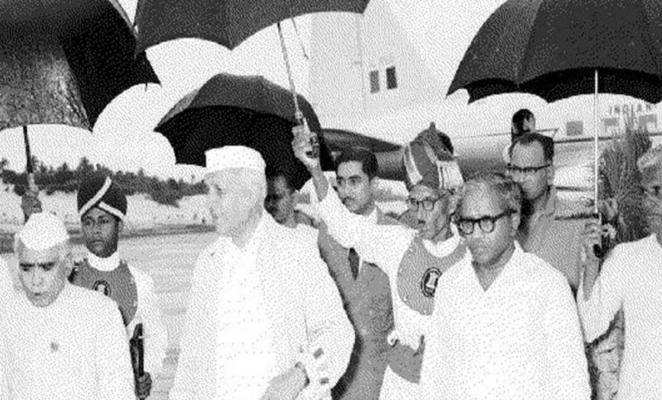 Pt. Nehru and EMS Namboodripad (on his left)
(Image by newsbred.com)   Details   DMCA

While Congress and Left roll together in the bed for the 2019 General Elections, the love birds of today bear little resemblance to the two fighting crows of 1959.

Prime Minister Jawaharlal Nehru had then dismissed the first elected government of Kerala scandalously, putting aside all norms of democratic conventions and as facts were to emerge later, not a little with the help of CIA and its funding.

Kerala, with the coming together of taluk of Kasargod (South Kanara district of Madras), the Malabar district and Travancore-Cochin under the States Reorganisation Act became a state on November 1, 1956. State Elections were held next year and the Communist Party of India, under EMS Namboodripad, won a slim majority of two seats (65 out of 127 seats).

The trouble began when EMS introduced an education bill for better wages and working conditions for teachers in private schools and colleges. The Catholic Church in the state, which ran various educational institutions, saw it as interference. Schools were critical for Church's missionary activities of conversion. They were supported by the Nair community, owners of many schools of its' own. Congress, seething under election humiliation, pounced on this opportunity. It launched Vimochana Samaram (liberation struggle) and turned it into a statewide agitation.

Strikes and protests flooded the streets. Mob violence and rioting soon broke out. Thousands were jailed and a handful were killed. It was projected as a breakdown of law and order in the state. Centre's intervention became an orchestrated cry.

The manner in which President's Rule was imposed in Kerala makes one cringe in dismay. As per Prakash Karat, a major CPI(M) leader: "Since the report of the governor was to come only a day later by air service via Madras, the Intelligence Bureau was asked to get the report from the plane in Madras and communicate the contents by telephone to New Delhi. The entire report was dictated over the telephone. It was this report that was used for the proclamation of President's rule (July 31, 1959)."

The role of CIA in this murder of democracy is well-documented. United States hadn't taken the formation of a Communist government in a state of India kindly. The US secretary of state, John Foster Dulles, had publicly termed it a "dangerous trend." Karat, in a piece in Outlook India, claimed:

"That the US provided funds to the Congress leadership for the struggle to topple the Communist ministry was confirmed later. A later American ambassador to India, Daniel Patrick Moynihan, in his memoir A Dangerous Place confirmed that the CIA gave money to the Congress leadership on two occasions to fight the Communists the first time in Kerala during the first Communist ministry and a second time in the 1960s for West Bengal."

Ellsworth Bunker, then US ambassador to India, subsequent to Moynihan's disclosure, admitted his own involvement. Bunker said the decision to provide funds was made "in Washington"but then I had leeways and discretion as to how it might be done and in what amounts."

A biography of Feroze Gandhi later claimed that he had called Indira Gandhi, president of Congress during those turbulent days, as a "fascist" over the Kerala affair.

Feroze Gandhi went public. "Where are the principles of the Congress? Are we going to be dictated by a caste monster we have produced?"

Such has been the abuse of Article 356 (imposition of President's Rule) that since 1950, there have been 113 instances of democratically-elected state governments being dismissed by the Centre, almost entirely under Congress rule.

Related Topic(s): Bunker; Congress; Democracy; Democratic; Facts; Funding; Gandhi; Left Wing, Add Tags
Add to My Group(s)
Go To Commenting
The views expressed herein are the sole responsibility of the author and do not necessarily reflect those of this website or its editors.