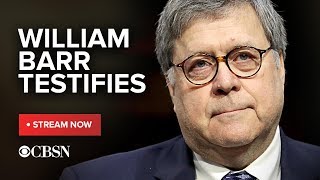 On Sunday, the chairman of the House Judiciary Committee threatened to subpoena Attorney General William P. Barr if he refuses to testify this week about the Mueller report.

But a subpoena is unlikely to elicit Barr's cooperation. "We're fighting all the subpoenas," says the President of the United States.

In other words, there is to be no congressional oversight of this administration: No questioning the Attorney General about the Mueller Report. No questioning a Trump adviser about immigration policy.

Such a blanket edict fits a dictator of a banana republic, not the president of a constitutional republic founded on separation of powers.

If Congress cannot get information about the executive branch, there is no longer any separation of powers, as sanctified in the US constitution.

There is only one power -- the power of the president to rule as he wishes. Which is what Donald Trump has sought all along.

The only relevant question is how stop this dictatorial move.

Presidents before Trump occasionally have argued that complying with a particular subpoena for a particular person or document would infringe upon confidential deliberations within the executive branch.

But no president before Trump has used "executive privilege" as a blanket refusal to cooperate.

"If Mr. Barr does not show up," the chairman of the House Judiciary Committee said Sunday, "we will have to use whatever means we can to enforce the subpoena."

What could the Committee do? Hold Barr in contempt of Congress -- under Congress's inherent power to get the information it needs to carry out its constitutional duties. Congress cannot function without this power.

Related Topic(s): Attorney General William Barr; Congress; Subpoena, Add Tags
Add to My Group(s)
Go To Commenting
The views expressed herein are the sole responsibility of the author and do not necessarily reflect those of this website or its editors.