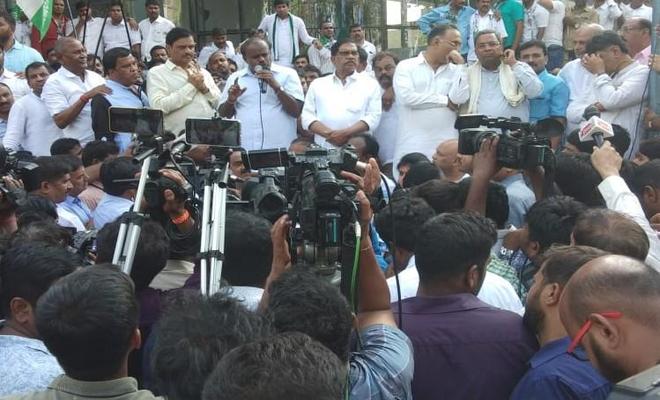 Chief Minister HD Kumaraswamy and all the biggies of Congress-JD(S) alliance in Karnataka hit the street together on Thursday against what he termed is a "political vendetta" in the form of Income Tax raids. Only, none of the IT raids concerned any politician in Karnataka!

BJP Karantaka weren't missing out on the irony: It tweeted: "No JD(S) or Congress MLAs, MPs or MLCs were raided by IT today. Houses of 13 PWD officers and 4 assistant engineers were raided. Were these officials agents of @HD Kumaraswamy?"

Income Tax department too, in an uncharacteristic move, issued a press statement stating, searches were carried out on "bureaucrats, MNCs, breweries, mining barons, diagnostic centres, trusts, educational institutions, medical colleges, real estate, fisheries and film industry... none were carried out on (any) MP, MLA or Minister."

What made Income Tax department go public was a blunt threat by HD Kumaraswamy against the officers doing their job. Kumaraswamy warned that he would adapt "Mamata Banerjee tactics."

Readers would recall that when Central Bureau of Investigations (CBI) had descended on the residence of then Kolkata police commissioner Rajeev Kumar in February, not only they were manhandled, picked up and detained in a local police station but their families in their residences were also put under siege. Chief Minister Mamata Banerjee had descended at Rajiv Kumar's residence and then held out a night-long dharna.

"... statements that sound like an incitement to physical violence issued by persons holding very responsible posts are highly deplorable," read the press release.

The Income Tax department, on their part, were willing to put the matter on record: "The said Central armed personnel were requisitioned from the state police (ADGP law and order) following normal protocol and have not been flown outside the state."

So, threatening government officials from carrying on their duty, descending with your goons at their offices, speaking lies even when the matter doesn't concern you or any politician but only contractors and miners etc, is a stand to protect the "democracy" in the country? And may we humbly ask all of our Lutyens Media why the Income Tax Department response hasn't been highlighted in their reportage?

Please take time out to read The Hindu today. Please do. Their coverage of this anarchy by Congress-JD(S) on Bengaluru streets is spread over multiple pages and is bigger than the coverage on India's successful launch of the anti-satellite missile system, arguably India's biggest scientific success after becoming a nuclear power, a few hours ago.

Others in Lutyens Media have been no different in their coverage today. None have questioned the anarchy and chaos that Congress-JD(S) caused in Bengaluru on matters which didn't involve them. None have introspected that readers could view them as standing with corrupts. None have pulled up HD Kumaraswamy for stating that "Income Tax department is corrupt" and a "stooge of Modi." Meanwhile, we pray no harm befalls the Income Tax officers involved in searches. And that the judiciary takes a quick call and issue strictures for the officers' safety. This story has all the making of a grim tragedy.

Related Topic(s): Bureaucrats; Democracy; Judiciary; Mining; Police; State, Add Tags
Add to My Group(s)
Go To Commenting
The views expressed herein are the sole responsibility of the author and do not necessarily reflect those of this website or its editors.