Members of Congress are telling the president he has no authority to launch a preemptive attack anywhere. 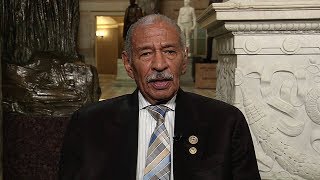 John Conyers knows a good deal more than Donald Trump does about the Korea Peninsula -- and a lot more about the Constitution.

So it is worth noting that Conyers has taken a lead in organizing congressional opposition to Trump's bombastic threats about unleashing "fire and fury" on North Korea. He has precisely what our "locked and loaded" president lacks: the wisdom that extends from experience.

As a young volunteer with the Michigan National Guard, Conyers was called up to serve with the 1279th Combat Engineers in the Korean War. He was in the war zone for a year as a lieutenant supervising repairs and replacements of Army aircraft.

When Conyers got home, he went to law school and then, with the encouragement of the Rev. Martin Luther King Jr., began a political career that would eventually see him chair the House Judiciary Committee. His decades of experience with congressional oversight of successive presidents during the undeclared wars of the 1960s and '70s in Southeast Asia, during Ronald Reagan's illegal interventions in Central America in the 1980s, and during the Bush-Cheney wars in the Persian Gulf have made him an expert on questions about when and how presidents may steer the country into conflict.

"As a veteran of the Korean War, I am ashamed that our Commander-in-Chief is conducting himself in a reckless manner that endangers our troops stationed in Korea and our regional allies," explains the Michigan Democrat. "Trump must immediately cease talk of pre-emptive war -- which must be authorized by Congress -- and commit to the diplomatic path advocated by both American experts and the South Korean government."

Conyers is right. And his position has attracted considerable support in Congress. For instance, while Trump claims to be concerned about threats to Guam, the congressional representative from Guam, Madeleine Bordallo, says she agrees with Conyers.

Related Topic(s): Congress; Nuclear Powers; Nuclear War; Representative John Conyers; Threats; Trump Foreign Policy, Add Tags
Add to My Group(s)
Go To Commenting
The views expressed herein are the sole responsibility of the author and do not necessarily reflect those of this website or its editors.